Former Presidents of Georgia and Ex  Governor of Odessa, Mikheil Saakashvili, will be hosting a weekly talk show in Ukraine. The TV show will be called “Another Ukraine,” and will be broadcasted on Ukrainian TV channel ZIK – Saakashvili announced on his Facebook page. 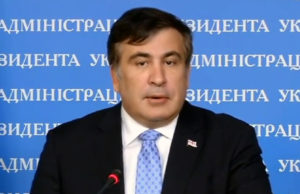 “On our TV channel ZIK we recorded the first episode of “Another Ukraine.” which turned out to be quite heated. Every week we will show you the kind of Ukraine which no other channel is broadcasting,” Saakashvili wrote.

In 2014 Saakashvili was charged in absentia in Georgia with abuse of power during his time in office as a president. He had regularly denied the claims against him and his party members and insists they are politically motivated.

Having taken Ukrainian citizenship when he took on the governor’s post, former President Saakashvili was deprived of Georgian citizenship by Georgian authorities in December 2015.

In 2015 he was appointed the Governor of Odessa region in Ukraine by Ukrainian President Petro Poroshenko. By Saakashvilis’ words, Poroshenko failed to meet his expectations on the development of Odessa. After a year and a half, Saakashvili resigned from the post and revealed his interest to create new political party in Ukraine.