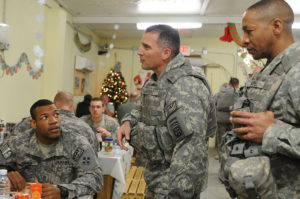 The commander of U.S. forces in Europe, General Curtis Scaparrotti, says the West should arm Ukraine in its fight against the pro-Russian rebels who are claiming Donbass territory in the east.

“I personally believe we need to consider lethal defensive weapons for Ukraine,” Army General Curtis Scaparrotti, who is NATO’s supreme allied commander and head of the US European Command, said, reported AFP.

In testimony before the House Armed Services Committee, Scaparrotti described the rebels as a “lethal tough enemy.”

“The Russians provide some of their newest equipment in order to test it,” he told the lawmakers.

The Obama administration had long refused to take the step of actually providing lethal weapons to the Ukrainian military. The General’s comments may signal a change of heart from the Trump administration, who has yet to make its policies clear on the Ukrainian conflict.

Scaparrotti’s remarks come before a scheduled meeting Thursday in Brussels between NATO and Russian representatives to discuss the issue. Europe and the U.S. have long accused Russia of arming and supplying the rebels in East Ukraine. Russia denies the accusation. Russian artillery fire, directed by drones, has proved especially lethal against Ukrainian troops.

In recent months, Russia has made steps to eventually recognizing the rebel territory as independent or even annexing the occupied regions of Donbass into the Russian Federation. Moscow has begun to accept official documents created by the Luhansk and Donetsk People’s Republics and even supported the area using the Russian ruble as official currency.

The conflict has essentially been frozen for some time but civilians and troops on the front lines continue to die in fighting.