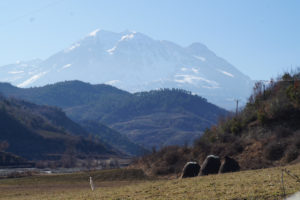 When my friend Besi, on a Saturday in February, suggested going to Sotira waterfall, situated in the East in the Gramshi district, I immediately said yes. That was for two reasons: first, I had seen so many great pictures from that waterfall, but had never been there. Second, I was so curious to pay a visit in Gramshi, which in my mind was in the middle of nowhere.

We received a couple of contacts for the trip. As never before on my previous journeys, I made no call or inquiry about the difficulty of the terrain or even did not ask if we were in the right season, nor if there was a proper driving road up to the waterfall. One day before we left, I just asked a fellow that had been there before, who told me that the road was really difficult, but maybe after some years, it might have been repaired.

So, we set off in three, me, Besi and Xhulia. Gramshi’s new route was actually great. Stunning views of Banja Lake, where they are building the hydropower station, made a very good impression on us. It was somewhere on the way, when I made the first call to a native contact, taken from a friend of mine. But the call was disappointing; he said we had chosen the wrong season for a visit at the waterfall. But we could enjoy a good lunch and turn back.

Why To Visit Kelmendi In Albania
It was way too long of a drive to be satisfied with only a good lunch in Gramshi, so we ignored the received advice. At the Gramshi exit, our navigator was not precise which turn to take; so we stopped and talked to a man passing by, who told us that the road was too bad and our car, an Audi A3, would probably get stuck. He advised us to park our car somewhere and hire a cross-country vehicle. He tried to find us one, but without any luck. So, we decided to leave in our car and see how far we could travel. When we took the turn to Sotira waterfall, the “civilized” road ended; what was offered to us was more or less a horse cart road. 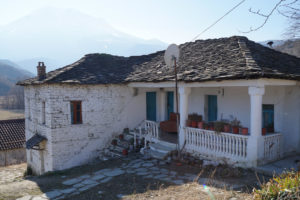 Up to the village of Koshovë, the road ended. In front of us were only mud and slush…then the river. We had to drive the car through all of this. It was impossible. Thus, we decided to turn back to Koshovë. Some children were standing in the backyard of a house and we asked them if there was enough room for us to park there. After we asked permission from the owner of the house, we decided to trek with backpacks, stopping through lavender fields to take pictures. The scenery was fascinating; there was water falling from everywhere. Tomori Mountain, which shaded the surrounding hills, lay in front of us.

When we arrived in the centre of the village, we stopped at a small bar, where Florina, a smiling lady, full of goodness, served us coffee. She told us that we had come in the wrong season, as well, but added it was worth trying after so long a way for us.

We set off through the ground breaking terrain and arrived at the Waterfall. Despite the fact that there was not so much water to make the white foam, as usual, we loved it. Xhulia, keen on photography, got a lot of beautiful pictures. Instantly, we decided that next time we would come in May, together with other friends…we would sleep in tents, just in front of the waterfall, a common thing for all visitors there, if it was in the warmer season.

When we returned to the village, it was almost dark. We met Florina’s relatives, who offered again some coffee, but being afraid of the darkness and the dogs which barked loudly (in fact, it was a wolf and we should have worried, but we learned that fact later), we were forced to leave. But her father-in-law said they would drive us in their car, up to the place where we had parked ours. When it came to pay for that service, they said “as much as you want.” 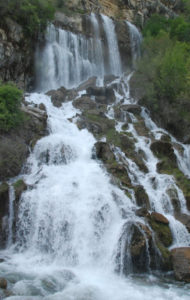 Since the problem of the car was resolved, we decided to take the coffee. We talked to Florina about their traditions, food, the village orthodox name, at a time when all the village inhabitants belong to Bektashism (the tolerant branch of Muslim religion, whose international centre is in Albania), their living conditions, the fact that nowadays the purchase price of lavender has been reduced from 300 ALL to 150 ALL. We asked for her phone number, so that when we returned for the second time, she would cook us their typical food called misnik.

We parted really satisfied; George, her brother–in-law, drove us up to the place where our car was parked. There, we handed some coins to the children we met previously, to buy some candies and left.

It was dark and difficult to drive because of the improper road. And to our bad luck, after one kilometre from the village, the car bumped into something hard and stopped. We went outside to see what had happened. The road was full of oil. The car would not start again. So we phoned Florina and asked her to tell George to come and tow our car. He called us back saying that he did not have the right equipment to do that. He tried to comfort us, by telling that he had phoned someone in Gramshi town to come and do that, pretending we were his relatives. Otherwise, no one could make a sacrifice in the middle of the winter at night, regardless of the payment. He also told us to stay inside the car, to be safe from wild animals.

Not much time passed when we saw the lights of a car in front of us. A man, together with his son Krenar, towed our car through the difficult road slowly and carefully, because there was high risk of crashing. While driving to the town, the man phoned the mechanic, telling him to come to the workshop after we had arrived.

By this time, it was 9 o’clock in the evening. Erdi, the mechanic, checked the car and said it would be better to start repairing the next day. But when he saw two ladies in the car, begging him for help, he decided to try and repair it within a couple of hours, so that we would not have to sleep in a hotel that night. He called another person for help and both of them worked tirelessly. 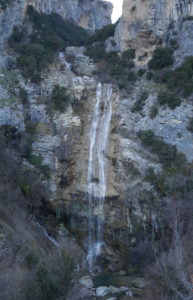 By 12 o’clock midnight, the car was ready and we set off for Tirana. We had remained speechless from the kindness of these people. When we asked Erdi about the payment, he told us better to send the money by bank the next day, as we might need that money during our way back. “When you are travelling, you never know what could happen” – he added smiling.

Maybe, this was the reason why we went to Sotira waterfall in an unusual season. We could not see the waterfall in its full capacity…but we saw the kindness and heart of its inhabitants.