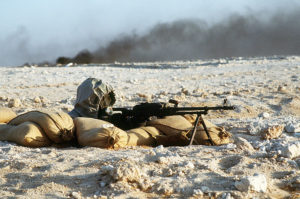 Russia has been long known to use mercenaries in conflict where ‘plausible deniability’ is desired. The Syrian Civil War has been no different.

The Wagner Group, a shadowy, private security company run out of Russia by Dmitri Utkin, a Russian reserve field-grade officer, has been front and center in the Ukrainian conflict as well. His fighters tend to be former Russian military soldiers or volunteers that have cut their teeth in Eastern Ukraine, according to The Moscow Times.

“Private military contractors fighting for groups such as the Wagner Group are reportedly paid between 80 thousand rubles a month ($1380) for service at a military base in Russia, and 250 thousand rubles ($4300) for active military service in Syria. The relatives of fighters are paid a handsome compensation in case of their deaths, which are never officially acknowledged,” again reports The Moscow Times.

Reuters has reported that at least 18 Russia soldiers, most of them mercenaries, have died in the Syrian conflict since January, more than the Russian Defense Ministry has acknowledged.

Upon their deaths, the soldier’s remains are shipped to the Russian homeland to be buried in zinc-lined caskets that were not opened, with no fanfare or defense officials present. They are paid four times the average Russian salary for duty in Syria and their next-of-kin are paid well upon their deaths, to keep information about the circumstances of their demise confidential.