Tbilisi officially condemned yesterday’s order of Russian President Putin, that directed certain military units of the self-proclaimed republic of South Ossetia to join the Russian army. The Georgian Foreign Ministry responded today, saying the annexation of the occupied region of Georgia by Russia is inadmissible. Experts meanwhile talked about Moscow’s far-reaching plans to gradually eliminate the armed formations of the region.

Tbilisi condemned “an obvious attempt by Russia to implement the creeping annexation of the occupied territories.” This is what the Deputy Foreign Minister of Georgia David Dondua said:

“International law does not recognize documents of this kind, therefore they are illegitimate. It is another matter that Russia is subjecting the cease-fire agreement of August 12, 2008, to revision. Therefore, we consider, that the next step will be annexation of the occupied territories of Georgia. “

Russia’s actions are a consequence of the foreign policy pursued by the Georgian Dream party, which is obviously flirting with Russia, Sergo Ratiani, representative of the European Georgia party, said on the parliamentary session:

“We no longer witness the activity of the international community with regard to the occupied regions of Georgia. We do not see the same sanctions from the Western community  that were taken against Russia in response to its aggression against Ukraine. The fault is the passive position of the Georgian government, which is flirting with Russia within the framework of the Karasin-Abashidze format. “

And according to Irakli Aladashvili, the editor-in-chief of the Arsenali military magazine, Russia acts in the Tskhinvali region under the approved scheme of world aggressors: as a rule, after the occupation of the land, plans are put into effect for the military, political and economic incorporation of the breakaway territory into its state:

“This is quite an expected step, whether we like it or not. After establishing full military and economic control over the region, Russia does not want, local armed formations in addition to its military, which, incidentally have been used against Russia in the past. Russia’s plans are easily predictable: the most efficient local units will join its army and are likely to be used in the hot spots of Syria and Ukraine, and the rest will simply be sent to the reserve. Russians do not need armed local people, who may oppose its plans. “

As for the political moment, according to Irakli Aladashvili, under the existing scenario, neither the protests of Georgia nor the sanctions of the West will have the desired effect, since there are simply no international security mechanisms in the occupied regions. 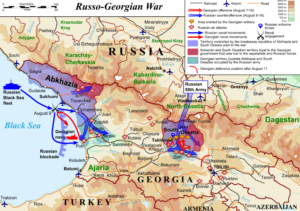 More on this topic: Putin To Consolidate Power Over Georgia’s South Ossetia