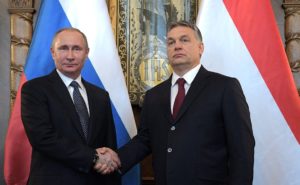 Addressing the Hungarian Chamber of Commerce and Industry in Budapest, Orban said that improving competitiveness was not the only way to bolster economic growth and “enhance the value” of the “homeland”.

“How to do this? First, by preserving ethnic homogeneity. One can say such things now, which you would have been executed for during the past few years, as life has proven that too much mixing causes trouble.” Orban said Hungary’s diversity “is within a certain band ethnically… within one civilisation”.

Orban declared Hungary’s government “cannot risk changing the fundamental ethnic character of the country. That would not enhance the value of the country but downgrade it instead, and toss it into chaos.”

The President added that limited diversity was culturally important because “the problem of parallel societies is undesirable.”

Orban continued his opposition to ‘guest worker’ programs to allieve Hungary’s shortage of workers. “I would not like to see the country drift toward a situation where lower-skilled work would only be carried out by foreigners…We ourselves have to do the work required to keep our country going, from scrubbing toilets to nuclear science.”