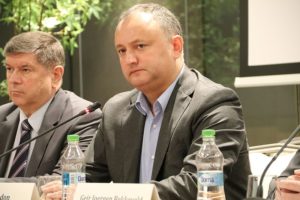 Moldovan President Igor Dodon warned the North Atlantic Treaty Organization (NATO) that the alliance’s attempt to bring Moldova into its orbit would hurt the tiny country’s security and undermine its neutrality.

“For me, the opening of such an office is not helpful for the security of the people; it is a provocation set up by the previous government,” he told reporters standing alongside NATO Deputy Head Rose Gottermoeller at NATO headquarters in Brussels.

Moldova has been a success story for Moscow’s efforts to bring former Soviet territories back under Russian control. Dodon’s first trip as head of state after last year’s election was to fly to Moscow.

Dodon won a hard fought election against the pro-Eu government which was destabilized after a massive theft of 20% of the country’s assets via a complicated bank fraud scheme. Many speculate the origin of the theft was the Kremlin and an example of new financial warfare tactics, or hybrid war.

Russia already controls 20% of the country with troops stationed in the breakaway province of Transdniester which declared its independence from Moldova after a conflict with the government in the 1990s.