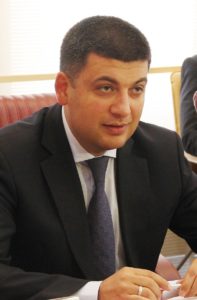 Ukrainian Prime Minister Volodymyr Groysman said recently that Kyiv should have a deal in place with the International Monetary Fund by the end of February of this year to release the next $1.7 billion tranche of the international organization’s $17.5 billion aid package. With renewed violence in Donbass as the Trump administration takes office, both sides have used the tensions to bolster its position with the White House. Groysman suggested Washington provide Kyiv with ‘defensive weapons.’

“We have practically completed negotiations (with the IMF) and only a few nuances remain,” he said of talks with the global lender to unlock the latest series of loans under Ukraine’s $17.5 billion (14 billion pounds), four-year bailout by the end of the month, reported Reuters.

“It’s important that all the conditions … have realistic deadlines,” Groysman said while in Brussels meeting NATO officials. The Ukrainian government is hesitant to put in place the type of reforms that the IMF has called for due to civil unrest that has resulted from the belt-tightening measures. Raising the retirement age and pension fund reform is one of these thorny issues where Ukraine would like to delay implementation.

Groysman accused Moscow of sponsoring “21st century barbarism,” in its quest to keep Ukraine from growing closer to Europe. “Russia completely controls the situation,” he said, meaning the Kremlin could reduce tensions if desired.

In Change Of Facts On The Ground, Moldovan President Warns NATO

Poland To EU – No More Migrants Without Security