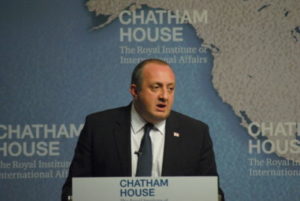 The President of Georgia, Giorgi Margvelashvili gave an assessment of Georgian-Russian relations and expressed his desire to meet with the president of Russia, Vladimir Putin.

Diplomatic relations between Georgia and Russia were interrupted in August 2008, by the actions of Tbilisi, in response to Moscow’s recognition of independence of Abkhazia and Tskhinvali region (South Ossetia).

According to Margvelashvili, recent relations with Russia have not changed.

“Relations with Russia remain in the same mode – mode of strategic patience, which has a complex side. I mean the agreements on strategic cooperation, which were decorated with the Tskhinvali region and Abkhazia, which are problematic and there is positive dynamics in trade relations… From another point of view, our attitude has not changed, “- Margvelashvili said in an interview with TV Company” Iberia “.

The president of Georgia has declared that he wants to meet with Russian President Vladimir Putin.

“My position on the meeting with the president of Russia is – you should always use the negotiating table. of course, this meeting should be prepared and all departments should be actively involved in its preparation. We should be focused on meeting as a negotiating table between politicians -..  that makes it possible to solve problems or to create conditions for their decision, “- Margvelashvili said. Meanwhile, according to him, the agenda of such a meeting is not necessary.