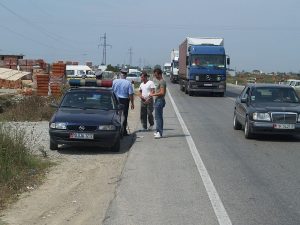 The number of traffic accidents in Albania has increased dramatically. Even with the police tightening their grip, many drivers weren’t lacking a passion for death. Based on data taken from road authorities from 2010 to 2016, 26279 accidents were recorded, 4060 with deadly consequences. The number of male deaths were almost five times higher than the number of women, which totaled 693. Minor injuries came in at 17478, while serious injuries totaled 4741. This means that a large number of people are being added to the disability rolls in Albania, making the situation more dramatic. Since 2008 85,000 people have been added, mostly from car accidents. The rest were recorded as workplace accidents. The age group most likely to be involved in these accidents is between 25 and 44, with a total of 10043.

The causes of the accidents are diverse. 4423 accidents are caused by inadequate visibility, 532 of them with fatal consequences. 2460 accidents have occurred due to speed beyond allowed limits, 512 of them with a tragic end. A large number of accidents also have occurred from head-on collisions with a vehicle coming from the opposite direction – 129 of them have died. An eye-catching category are accidents as a consequence of non-compliance with traffic rules – many drivers don’t respect the ‘keep left’ rule, where 43 have died. Other causes of accidents are: changing the direction of the vehicle or maneuvering without signal warning, not stopping at traffic lights, wrong overtaking, improperly driving, blindness from sunlight, incorrect and sudden stoppage.

State Police have added control measures and have increased fines over the past few years, but this has not solved the situation. A large part of the problem is that some drivers dare to circulate in the streets, without a license or with a fake one.