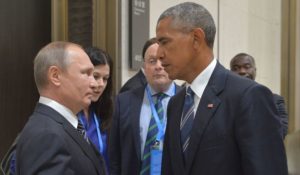 Something happened the day in 2012 when Russian Prime Minister Dmitry Medvedev passed on to President Vladimir Putin the notorious private message President Obama had asked him to convey — “Tell Vladimir I’ll be more flexible after the election.”

That is the exact moment, I believe, when Mr. Putin concluded 1) that the long-awaited opportunity to avenge the fall of the Soviet Union had arrived; 2) that the American president was weak; and 3) that if the American public elected such a man, they must be weak, too.

Mr. Putin decided to destroy the West, using his KGB-trained hybrid warfare skills to infiltrate, divide and conquer. We saw it in Crimea. We have seen it in eastern Ukraine and Syria. We are seeing it in NATO, as Turkey and other Eastern European states are pulled towards Moscow’s sphere of influence. And yes, we are seeing it in the United States.

I have no doubt that Russian actors are behind the hacking of Democratic internal campaign emails. That is not the problem: We hack them as well. The problem is that Mr. Putin sees the cyber assault as an opening to destroy this country as we know it, driving a wedge between Americans.

I’m also sure the KGB was behind the placement of overwhelming numbers of Marxists in our educational system over the preceding decades. Moscow succeeded beyond its wildest dreams. Today, our universities are not halls of learning but really reeducation camps, preaching a long-dead ideology that even the Russians don’t value anymore. The dominance of the intellectual classes cracked open the door for Russia and others in exactly the way Vlad’s security service bosses imagined all those years ago.

It must be gratifying for the leadership in the Kremlin to see Mr. Obama actively assisting them in their mission. He has been the racial divider-in-chief. He shares the goals of the KGB back in the day — to change America as we know it.

Recently, we learned that Russia was behind the funding of many anti-fracking groups in the West, an obvious attempt to cripple the American economic engine that once defeated the Soviet Union. That strategy hasn’t worked out so well so far, as the Bakken fracking fields drove down the price of crude anyway. Still, the effort offers a revealing glimpse into how the Kremlin works.

I have no doubt that Mr. Putin is funding many fringe political groups in the U.S. and Europe, attempting to crack open the widening fissures of discontent against the liberal, immoral (as Russia sees it), progressive policies of the neo-Bolsheviks in our midst.

All of this is happening as Russia floats the largest armada assembled since the end of the Cold War down the English Channel, as a refurbished Russian carrier operates close to NATO borders, and as Russian forces fight in support of Syrian President Bashar Assad against American-backed Sunni rebel groups.

This dividing and conquering is assisted by a well-funded Russian state media propaganda operation that now enjoys a global reach, spinning the Russian narrative better than Hillary Clinton and Mr. Obama could ever do themselves. I think that is why the Left in the U.S. is so angry — Mr. Putin is beating them at their own game, a game they have been playing for years against the American conservative movement.

America is cracking right down the middle. My son, who is considering entering a service academy next fall, recently told me that he doesn’t want to go in the military if Mrs. Clinton is elected because he doesn’t want to kill other Americans. I thought that was a very prescient statement.

Russia is fostering these divisions. Mr. Obama has enabled and nurtured them. As for Mr. Putin, he has a long-term goal in mind. He’s looking way down the line, towards the day when he steps down and Russia is once again a superpower, exporting food and hydrocarbons and deploying its military all over the world, working in conjunction with China to dominate a weak and divided West.

Russia Wants To Monitor US Elections

Putin Says Soviet Union Could Have Been Saved

Orban: EU Must Change After Christians Murdered In Europe For Christmas

Russia Is Using Syria To Run Circles Around The US