The IDF image of Beirut

A Fars Air Qeshm flight Boeing 747 touched down in Beirut at 2:04 pm on October 16. The large white aircraft had left Tehran at 9:33am that morning but had concealed its flight details from international tracking authorities. It stayed in Beirut for almost a day before leaving for Doha on October 17. That plane is now at the center of a report at FoxNews alleging that it carried “GPS devices to make precision-guided weapons in Iranian factories inside Lebanon.”

The details of the recent flights according to Flightradar24

The report on October 20 says that western intelligence sources believe the cargo plane was carrying items for Hezbollah. These components “were bound for these Hezbollah secret sires near the Beirut airport to target Israel in the future.” FoxNews quoted former head of military intelligence Amos Yadlin as saying Israel was determined to confront this kinds of technology transfer. “Israel is determined not to let it happen,” he said. “This is a source of concern because if the Iranians, on the one hand, are determined to build this precision project with ballistic missiles and the Israelis are determined not to let it happen, this is a recipe for collision.”

Background: The July trips and the air corridor

Fars Air Qeshm’s Boeing 747 has been implicated before in suspicious activity. In September FoxNews also reported that the same plane had departed from an air force base in Tehran on July 9 and also stopped in Damascus before continuing on to Beirut. It also landed in the afternoon. It used the flight number QFZ9960 as opposed to its October number QFZ9950. It also carried out another flight on August 2, leaving Tehran and landing in Beirut. The airline was also fingered in April as one of several being monitored by US intelligence for its role as an air bridge between Tehran and Damascus.

“One of the flights in which a Boeing 747 that departed on July 9 from an air force base in Tehran, stopped for a short layover at the international airport in Damascus, continuing with a rather “uncharacteristic flight path” to the Beirut international airport and landing at about 4 pm in Lebanon. Fox News added that the second unusual flight was conducted on August 2. After departing Tehran’s international airport, flight number QFZ9960 landed in Beirut at 5:59 pm. This time, the plane did not stop for a layover in Damascus. However, it followed a slightly irregular route north of Syria. Fars Air Qeshm halted its activity in 2013 amid administrative failures, but restarted its operation in March 2017. Among the members of the company’s board are three Revolutionary Guards members: Ali Naghi Gol Parsta, Hamid Reza Pahlvani and Gholamreza Qhasemi.”

A very dangerous development. Iran using Beirut international airport to traffic weapons to Hezbollah. The Iranians are looking for new smuggling routes they think will be immune to air strikes. This report reads like a warning. https://t.co/aIGsMPbuNC

The “civilian flights” smuggling route has been heavily reported since early September. In general these reports could be seen as a warning to Hezbollah. They also are part of the US strategy to roll back Iran, including the US Iran Action Group that was created. The US Congress has warned about Hezbollah’s role and the Trump administration is taking it seriously. I’ve analyzed this issue in the past, looking at how August was a key time for the US upping its confrontation with Iran. The September reports could be seen in that light.

Iran has also denied that its planes are being used to smuggle items to Hezbollah. “Releasing such incorrect reports have become common in the past days and weeks and indicates intensified psychological warfare by anti-Iran and hostile circles,” Foreign Ministry Spokesman Bahram Qassemi told the Arabic-language al-Alam news channel. Lebanese authorities also denied the September reports.

Qeshm’s air route has been looked at even before these accounts. In May one man noticed its suspicious route to Damascus. Also in April and February. Rick Francona noted “More resupply to the Syrian regime – a probable #IRGC-controlled Qeshm Fars Air B747-281F (EP-FAB) freighter round trip Tehran/Imam Khomeini, #Iran – Damascus, #Syria. Daily flights have decreased to weekly flights.” This goes back to August 2017 and Rick had noticed it earlier in 2017. This shows that the same plane was often tracked in relation to the war in Syria.

There has been pushback in the past against these reports. Sputnik news, which is close to Moscow’s narrative, argued in September that pushing the “smuggling” story caters to “Washing and Tel Aviv with a pretext to strike Iranian advisors and Hezbollah fighters in Syria.” Israel has carried out over 200 strikes in Syria over the last two years according to a report in September. This is on top of the 100 airstrikes from 2011-2016. My piece at The National Interest looked at this issue.

Prime Minister Benjamin Netanyahu told the UN General Assembly on September 27 that Hezbollah had a number of clandestine sites in Beirut. Lebanon then mocked the speech, taking people on a tour of the alleged sites.

Despite the denials Hezbollah has already admitted it has precision missiles. On September 20 Hezbollah said that “it has been done,” referring to outfitting its missiles with guidance systems. “The resistance now owns precision missile,” Hezbollah leader Hassan Nasrallah said during a speech. ““Attempts in Syria to block the way toward this (missile) capability” have failed, Nasrallah said. “If Israel imposes a war on Lebanon, it will face a fate that it never would have expected.”

The exposure of the alleged smuggling route and allegations that GPS systems are being put on the ballistic missiles poses a direct threat to Israel. In the past Hezbollah’s missiles have been relatively inaccurate. However the Islamic Revolutionary Guard Corps (IRGC) has increased the accuracy of its own missiles in Iran. In recent months it has showcased this accuracy firing Fateh 110 missiles at Kurdish opposition groups in Iraq in September and fired its Zolfiqar and Qiam ballistic missiles at ISIS in Syria. The attack against ISIS was in response to a terror attack in southwest Iraq targeting a parade in Ahwaz. 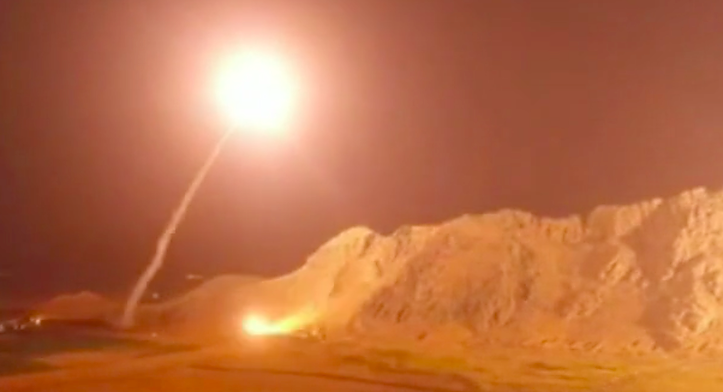 The attack in Iraq was able to hit a room in a large building, showing the missiles were very precise. MECRA reported the attack on Koya in September. Both of these strikes show Iran is becoming more brazen in using its missiles across international borders. Iran was also alleged to have moved missiles to Iraq.

An escalation or more of the same?

The allegation that Iran has begun to transfer this technology to Lebanon’s Hezbollah is a major escalation and forms part of Hezbollah’s desire to expand its arsenal in the wake of the Syrian civil war winding down. Hezbollah has been devoting resources to fighting in Syria. The last years have seen reports in Syria that Israel has struck weapons convoys destined for Hezbollah. In October Russia deployed the S-300 missile system to Syria. Now Jerusalem has been ramping up accusations about Hezbollah’s weapons systems and how Hezbollah is increasing the precision of its rockets and hiding them beneath Beirut. All of this points to increased tensions between Israel and Lebanon.