A Syrian rebel tank is withdrawn from Idlib as part of the agreement for heavy weapons to be pulled back from the frontline in the demilitarized zone. (MECRA)

In an interview with Middle East Center for Reporting and Analysis fellow Alex Grinberg , we discussed the Idlib Agreement and what Moscow’s calculations amid the October deadlines to withdraw weapons and extremists from the demilitarized zone.

MECRA: What are Russia’s interests today as the Idlib agreement is being tested in October?

Grinbeg: What I think is we should look not at Russians say but what could be their first interest. I think their first and foremost interest is consolidation of Assad’s power and army. It means they want, for example, Russia-created militias to be integrated into Assad’s force. Overall I think that no matter how it unfolds, Russia has the upper hand there. So everything is more or less ok with their scenario.

What about Russia’s view to today of the Syrian situation

I would say cautiously that Russia is interested in any partnership, but that it will conserve Russian influence. They aren’t interested in creating a structure that is independent, so no one needs Russia anymore. They want to create something that is always dependent on Russia, and this is how Russia works. This is important not just in Idlib but throughout Syria. We saw many articles in Western media analyzing economic interests of Russia and Iran in Syria. In my opinion this is incorrect, because international analysts have estimated cost at $50 billion.

This would bring Syria back to its pre-war period. All the oil fields and other natural wealth are scare. So one cannot speak about Russian and Iranian economic interests. Iran invested $10 billion Assad regime to solidify the regime and keep Iranian access to the sea and to Syria and Lebanon. It was not to gain economically but to preserve the state of conflict with Israel. Without that conflict, I can’t see the logic of investing in Syria.

With regards to Russia, any economic calculus has already been only tributary through geopolitical goals of Russia, such as influence, or confronting NATO and America. So if we talk about economic resources, so some of Putin’s cronies such as the Wagner leader might want to gain oil fields. But these gains have nothing to do what one calls “economic interests of a state.” This is an important differentiation. So another thing I understand much more clearly now. When we read Russian analysis of the situation, they are thoughtful and learned and detail-savvy. They have flaws, but the question is not in Russian capacity to analyze. But there is no back-channel between Russian power with Putin at helm and Russian public and the intelligence community. You see well-written articles but nothing can promise you that Putin listens to this advice as opposed to his cronies and this reflects the decision making of Russia. So he may decide to deliver S-300 tomorrow, as he recently did, and revoke it the day after.

So power is concentrated in Putin’s hands and advisors

But these are not necessarily professionals, rather for instance a judo partners, childhood friends or close confidants like the CEO of Rosneft oil giant Igor Sechin. Recall Yevgeny Primakov who came from an intelligence officer background. He was a classical intelligence officer and fluent Arabic speaker. Primakov tried to introduce methods of intelligence analysis and brainstorming into the Soviet intelligence community. He was neither venal nor corrupt, was committed to Soviet and then Russian interests and always refused lucrative, and corrupt, jobs. There are no people like him now in the system. 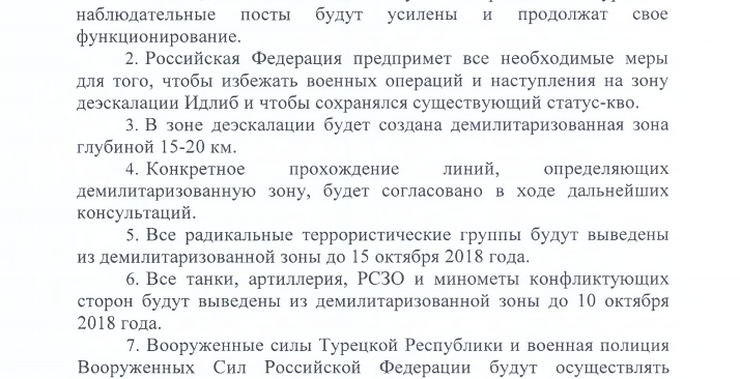 Text of the Idlib Agreement

What happens next? Is Russia committed, or will they follow it to the last detail?

They don’t care if Turkey also participates in the process but on condition that Turkey is checked and cannot spoil Russian plans. So they may discuss with them. They aren’t like Assad, they don’t take revenge against those who were in the uprising. They will bomb and destroy but when the rebel militias are ready to negotiate they are willing to stop bombing and incorporate the militias. This is the historic way Russia dealt with groups they colonized, such as in central Asia or Caucuses. This happened with the Chechens. So they use this tactic skillfully, to co-opt one militia against another. So they will show to the West that “these guys are fighting each other” and are not an opposition. They may surround one area, and get a militia to surrender or stop fighting, but it is a way to get them to cooperate.

Another internal dimension is that in Dara’a people are fearing Russia will leave because it means then Assad’s sadistic oppressive apparatus will come back. So this also works in Russia’s favor in two ways. The people want Russia to stay not because they love Russians but because it is better than Assad. And on the other hand it is a good pretext for Russia to rightly say that people here want Russian presence. So to sum it up, Russia is good at “managing the swamp” because they themselves are used to managing a complex system like this.

So in Idlib, if they can improve their position in favor of Assad and allies, and they will do it under the pretext that the opposition violated a ceasefire so you cannot expect they will adhere to the ceasefire if they can exploit it in their favor.

Hausmann’s Miracle In Albania Is Based on Economic Lies