Yossi Beilin, who played a leading role in initiating the Oslo peace process suggested at Al-Monitor that Palestinian Authority President Mahmud Abbas “hand back the keys” to Israel. It comes in the context of the US cutting funding to UNRWA and other US, regional and Israeli policies that have isolated the PA. He writes:

“On the other hand, drying up the PA’s funding could lead Abbas to ‘hand over the keys’ to Israel and letting it run the PA. The Americans have conceivably failed to consider such an option, although it may be the only one left for the Palestinian leadership. The PA cannot afford deep cuts in US aid that would leave it only with money to train its security forces and coordinate between them and Israel, bolstering its image as Israel’s sub-contractor in the occupied territories. If this ends up being the outcome of the American move, the government of Prime Minister Benjamin Netanyahu will emerge bruised.”

But the Palestinians disagree, and so does the EU. On September 1 Saeb Erekat rejected the US decision to cut funding to UNRWA. “We reject and condemn this American decision in its entirety. The United States of America is not entitled to cancel UNRWA, which was established by UN General Assembly Resolution 302 of 1949, which stipulated that UNRWA should provide services in all areas until The issue of refugees in all its aspects.” Germany and Sweden have announced that they will help plug the gaps of the US funding withdrawal. The Palestinian Authority isn’t handing back the keys.

There has been a persistent, kind of paternalistic, agenda by some Israelis pushing for the dismantling of the PA. It comes under the guise that this is what is “best” for the Palestinians. The argument goes that if the PA dissolves itself and forces Israel to take responsibility for the West Bank, rather than being able to outsource security and other services to the PA, then Israel will run towards the two-state solution.

Beilin suggested the same “hand back the keys” concept in 2012 at Foreign Policy in an open letter to Abbas.

“I admit that I never believed the moment would come when I would have to write these words. I am doing so because U.S. President Barack Obama has convinced you not to announce, at this point in time, the dismantling of the Palestinian Authority’s institutions and the “return of the keys” of authority for the Palestinian territories to Israel. Because there have never been serious negotiations with the government of Prime Minister Benjamin Netanyahu over the last three years, and because you did not want to perpetuate the myth that a meaningful dialogue existed, you have been sorely tempted to declare the death of the “peace process” — but the American president urged you to maintain the status quo. It is a mistake to agree to Obama’s request, and you can rectify this.”

Despite the view that the Oslo process and two-state solution is not possible to salvage, the PA and its vested interests aren’t going anywhere. The EU is also vested in the peace process, as is Jordan and the Gulf States. Therefore what we will see is that they will fill the holes left by American funding. 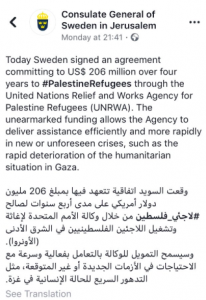 This will begin with Sweden, Germany and other powers stepping in. The idea in Israel, on the left and right, that the PA will simply disappear after 25 years is mistaken. 25 years is a long time. The British Mandate only last around 25 years (30 if you start counting from when the British got to Jerusalem, but officially closer to 25). So the reality is that the Palestinian state in the making may not be going anywhere, but you can’t simply expect billions of funding into government institutions over the decades to not make a mark. And the Palestinian Security Forces aren’t giving up their weapons either. 10 years of training them has created a real force on the ground.

A Significant Shift Of World Perspective Regarding Iran Policy