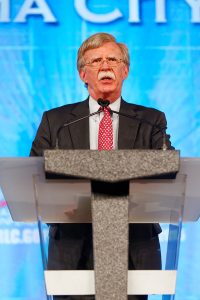 John Bolton and Mike Pompeo have a mountain of problems on their plate in their newly appointed positions. Mr. Bolton as national security director needs no Senate approval. Besides Mr. Pompeo’s confirmation, which should not be a high hurdle, the West Point graduate must deal with a resurgent Russia stoking hot wars in Syria and Eastern Ukraine, in addition to Moscow deploying active measures in Ukraine proper, the rest of Europe, and the U.S.

Ukraine has become a primary challenge to the U.S. European policy. It is toxic mix of the war in the East, and domestic corruption.

Sergii Leshchenko, a prominent and respected anti-corruption activist in Ukraine, who is well thought of in Washington, alleges that the Ukrainian state is captured by corrupt oligarchs and senior government officials. According to Mr. Leshchenko, the silent gray cardinal of the Ukrainian parliament, Oleksandr Granovsky, and Dmytro Firtash, the billionaire businessman fighting extradition to the U.S. on Foreign Corrupt Practices Act charges, are key agents enabling corruption and state capture in Ukraine.

Ukrainian media and anti-corruption activists maintain the two navigate and play kingmaker not only during the Yanukovych period, but currently with pro-Western President Poroshenko in charge. Mr. Granovsky is the Member of Parliament from Petro Poroshenko Bloc. He and others are alleged to have captured the Ukrainian state, including the legal system, by privatizing TV channels, banks, hotels and other key assets.

The epicenter of European tensions with Moscow is Ukraine. After more than seven years of peace, European tensions are rising precipitously. NATO’s encroachment into Russia’s near abroad, and Vladimir Putin’s aggressive foreign policy, are setting a collision course between East and West. 2018 will be a most dangerous year.

Recent events in Syria, where American air power decimated several companies of Russian mercenaries, coupled with the Trump administration’s threats to again make Bashar Assad pay for continued use of chemical weapons in the ongoing conflict, have escalated the chances of possible confrontation between Moscow and Washington. With President Trump approving the sale of lethal weapons to Ukraine, it has become more important than ever in U.S.-Russian relations. Russia is unlikely to accept a pro-Western government in Kyiv; therefore the Donbass conflict will simmer on, destabilizing the country, the Kremlin’s next best option besides regime change.

In addition to the hot shooting war in the east, Ukraine is fighting a war in the capital against the legacy of corruption and oligarchy. The Poroshenko administration is neck-deep in the morass, enabling the cronyism as competing clans of oligarchs fight over the spoils of a much-weakened economy, many playing both sides of the conflict in Donbass. In addition, pro-Russian and nationalist oligarchic clans are battling in a deadly competition that looks to take no prisoners. For team Moscow, Dmytro Firtash, the gas distribution king is on center stage, along with pro-Moscow businessman and politician, Viktor Medvedchuk, who can call Mr. Putin and Prime Minister Dmitry Medvedev the godfathers of his children.

Western-dominated international financial institutions have been trying for years to reduce the corruption in Ukraine and held off on releasing the bulk of the International Monetary Fund’s $17.5 billion aid package until certain reforms are pushed through. These pro-Russian oligarch factions are the reason the anti-corruption court and other developments have yet to be fully enacted, preventing a more transparent governance, society and economy.

Mr. Leshchenko, the anti-corruption activist, writes in Eurozine, “One of the oligarchs closest to Yanukovych was Dmytro Firtash. He made his fortune as a shareholder in RosUkrEnergo, the opaque gas company founded by Semion Mogilevich, one of the FBI’s most wanted fugitive criminals who acted as middleman between Ukraine and Russia.” Firtash owns DF Group and his principal business partner is Sergey Levochkin, the only Ukrainian oligarch who was also Chief of Staff of deposed President Victor Yanukovych. There are allegations their empire-building activities include corruption, corporate raiding, and illegal operations. Prosecutor General Yuri Lutsenko announced on Facebook on March 19th, that Firtash’s business offices were searched and is suspected of tax evasion and money laundering.

Inter TV Channel is a powerful media outlet owned by Firtash and Levochkin. Just as the Russia troll factory, the Internet Research Agency, Inter is accused of spreading fake news and misinformation in Ukraine and beyond, where pro-Russian politicians and messaging are the usual fare.

There are even reports that a Firtash-controlled private army just stormed the largest soya bean factory in Ukraine, leaving six people wounded. This type of behavior apparently occurs because MP Granovsky may be supporting DF Group.
Mr. Leshchenko writes about Granovsky in the Kyiv Post, when discussing the MPs who support Poroshenko’s corrupt “clan”, “Lawmaker Oleksandr Granovsky works as Ihor Kononenko’s (Poroshenko’s closest ally) apprentice in building the family clan. He is responsible for passing the right decisions in the courts and guarantees the adoption of the right decisions through the prosecutor’s chain. At Security Service of Ukraine, the tandem of Kononenko-Granovsky is served by the deputy head of the SBU, Pavlo Demchyn, who was recently appointed as the first deputy head of the SBU, and the head of the anti-corruption department … Former member of the Party of Regions Yuriy Ivaniushchenko was removed from Interpol’s Red Notice wanted list and can travel freely now, without the risk of being arrested. This was possible due to the decision of the Dniprovsky Court in Kyiv – a venue favored by President Petro Poroshenko’s eminence grise, Oleksandr Granovsky.”

Mr. Bolton’s NSC, the Pompeo State Department and the Trump administration must prioritize a fight against state capture in Ukraine. It’s time to advocate clean presidential and parliamentary elections in Ukraine. Providing weapons to fight pro-Russian separatists is not enough. Corruption may destroy Ukraine before Russia ever does.
Mr. Bolton with his signature toughness and Mr. Pompeo, with his intelligence and congressional background are ideally suited to lead this charge, using all tools in the U.S. policy toolbox. American and European law enforcement need to play an active role in addressing U.S. and Western national interests in Eastern Europe, in coordination with State Department and the intelligence community.

The United States already has a tool for accomplishing this agenda — the Magnitsky Act, which allows the executive branch to target globally those guilty of human rights abuses or graft. The corrupt Ukrainian oligarchs and officials, such as Granovsky, Firtash and Medvedchuk, should be targeted under the law. U.S. authorities should pay attention to who – and how – illicitly pays them off. These officials’ vulnerability is their money stashed offshore in Western financial institutions, where, ironically, it is safe from the type of theft that is rampant in Kyiv.

Investigations, asset freezes, visa bans and other financial sanctions are all available tools under the legislation.

The goal should be that corrupt politicians should not be viable candidates for top public office. It is clear the
West has to be careful in selecting top political allies and strategic bedfellows in a country where corruption is rampant, and oppose the growing Russian business, economic and political influence.