I was honored to have the chance to interview Shabnam Maddadzadeh at the Free Iran Gathering 2018 in Paris this week. She is a remarkable woman.

My first impression of Shabnam was her vulnerability, and her humility. She is a rather small human being, almost frail, who sat politely with her hijab tightly wound around her face. Her cheeks flushed with embarrassment, or was it rage, as she talked of her ordeal at the hands of the Iranian Revolutionary Guards, who put her in prison at the age of 21, for five years, along with her brother. You would not at first think this person spent such a large part of her youth in one of the world’s most notorious prisons at the hand of a brutal, murderous dictatorship. However, once she started speaking, her inner-strength was obvious, and it was clear it was this strength that enabled her to survive.

Admitting that she was a student activist, she began by explaining she was studying near Tehran, almost a decade before, when she was arrested by the Iranian intelligence services, along with her brother, for ‘actions against national security’.

Shabnam spent three months in solitary confinement, in a very small room in the infamous Ward 209, at the notorious Evin prison. She went into detail about the horrible, unsanitary, unsafe, and degrading conditions at the prison, that have been well documented by other accounts.

Her health suffered during this period.

IranHumanRights.org reported during this time – Behrouz Alavi, a student activist, also referred to Madadzadeh’s weekly visitation, adding: “The problem is that she is being kept in an inappropriate location in the Women’s Ward. Of course there are other political prisoners in that ward, but there is insufficient medical attention to prisoners in that ward, especially as her condition has become critical in the past two weeks and she has not received any medical attention.”

She described how she was tortured, and how she confessed under duress to the regime’s accusations. She was then made to watch her brother be tortured and subsequently confess. Shabnam described how she was blindfolded and brought into a room where she could hear another man being beaten. When the Revolutionary Guards took off her blindfold, she realized it was her brother. She was forced to watch. “They can get what they want,” she described, with the look of horrific remembrance on her face as she talked. Even while sitting in a very nice hotel in Paris, the memories seemed to flood back.

After 9 months, both her and her brother were exiled to Rajaee Shahr Prison to serve the remainder of their sentences. Here they were placed among ordinary murderers, drug dealers, and other dangerous criminals. There was no drinking water; any water needed had to be purchased. The conditions were unsanitary, and overcrowded. The food was not fit for human beings. There were constant threats of execution.

Anyone would be forgiven for giving in to hopelessness and despair during an ordeal such as this; however, Shabnam only strengthened her determination. “During this short five years, I saw the true face of the regime. I was forced to watch others being tortured, or executed. However, the worst thing I experienced during this time was the knowledge that I was alone. The guards frequently said, ‘We can do anything we want and no one can hear your voice.’ The government can very easily kill anyone they want. They just say you committed suicide. It is a big lie. It was during this time that I decided, upon my release, that I would become the voice of the oppressed in Iran.”

Luckily, other people outside Iran did become her voice, shining a light on her desperate situation. Amnesty International and others highlighted her case, resulting in reprisals against her and her family in Iran. Family visitation was suspended for six months at one point. 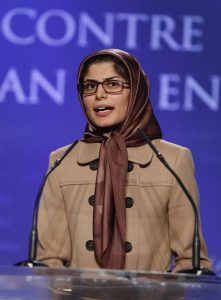 “Human rights demand that prisoners get a voice to the outside world,” she added.

Shabnam was released in 2015, after serving five years. She could no longer get a job or study in Iran. With help from the outside, she and her brother escaped to Europe. Her family was put under more duress back home.

She feels secure now she says (although she would not tell me in which country she lives). But she has committed herself to using this freedom and security to be the voice for those prisoners left behind in her native country.

After speaking to this remarkable lady, I can’t help but think how our social justice warriors could benefit from her experiences. Oppression is not screaming ‘f*&K you!’ to your college president while on a free ride to Yale. It is being left alone to rot in a filthy hole of a prison, where no one can hear you, or help you.

I plan to help spread Shabnam’s voice in order that maybe a few young Americans will wise up and see the folly of their immature ways in our country.

One can hope can’t we?