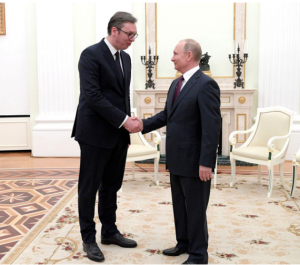 “No more burning bridges”. This is what Serbian President Aleksandar Vucic declared as soon as he set foot in Ankara.

The Serbian leader paid one of his most important official visits to Turkey on Monday, and sounded focused on improving relations with Turkish President Erdogan. It is not a coincidence Vucic planned his visit before going to Moscow. The optics were much better to see Erdogan first, taking into consideration the recent closer links between Russia and Turkey, to show he does not take lectures from big sister Russia on how to behave or what to discuss with the Turkish president. Of course, Moscow is Serbia’s favourite place to pray, so no doubt, the agenda was jointly prepared beforehand.

Vucic and Erdogan met to discuss bilateral relations and exchanged views on recent regional developments. They both expressed their satisfaction in narrowing the diplomatic distance between the two countries, and building bridges to strengthen mutual friendship. They sounded very convinced that Serbian-Turkish relations are important to ensure partnership, peace and security in the region.

As was expected, such a visit directly attacked the EU and its delays in open its doors to the Balkans. Therefore, it was not a surprise that during the press conference, Turkish President Erdogan declared the West can not bear Turkey’s position in the Balkans, as well as its efforts and initiatives. The press conference was mostly centred on economic agreements. Vucic stated there are many other areas in which to cooperate as well. “Turkey is the biggest power and the strongest country in the Balkans and that is important for us. If others see Turkey just politically and not in the field if investments, there is nothing more I can say”, said Vucic.

Erdogan confirmed the Turkish Agency of Cooperation and Coordination, TIKA, will continue to carry out projects within Serbia, as it is doing in many regions of the world, being responsible for implementing the country’s development cooperation policies overseas. “Until now, 220 projects have been carried out in Serbia. The bilateral trade volume surpassed $1 billion in 2017. The target for 2018 is $2 billion, going to $5 billion in the long term. Among the biggest projects, the Belgrade-Sarajevo highway that will strengthen regional and economic ties”, stated Erdogan.

Turkey’s goal is to become the main investor in Serbia and other targeted nations. Western Balkan countries are poor and they welcome anyone who is ready to invest, East or West, as long as all the Balkan nations are not allowed to join the EU, being right in the middle of Europe.

But, why this move now? Why such visits in a row to both countries which are hostile to the EU?

The recent rapprochement between Turkey and Russia that has strengthened their ties, has served to counterbalance its deteriorating relations with EU and the US. Serbia is exploiting this situation well. Turkey and Russia have put aside their traditional rivalries and differences on regional issues. Russia serves Turkey for many reasons and vice-versa. Analysts consider Turkey and Russia as in a marriage of convenience; their relations are economic and military. The construction of the “Turkstream” pipeline to transport gas from Russia to Turkey, as Turkey relies on Russia for its energy needs, and the purchase of advanced S-400 air defence missile from Russia are the latest projects between these two large countries. Being a NATO member and buying weapons from Russia seems counterproductive. However, Erdogan called it a matter of Turkey’s national security. Many believe there are a lot of similarities in how Erdogan and Putin conduct themselves while leading their countries.

The West is also discomforted by the alliance of Turkey with Russia and Iran over Syria. However, cooperating with Russia is important for Turkey to achieve its agenda in Syria, especially to prevent an autonomous Kurdish entity from emerging along its borders. Russia has allowed Turkey to use Syrian airspace to enter militarily. This has further weakened Turkey’s relations with NATO and the US. Having the second largest army after America, only NATO can reengage Turkey, encouraging Erdogan to remain a reliable ally, declared some analysts.

Back to Vucic’s visit in Moscow; he arrived on Tuesday on a working visit to attend the 73rd anniversary of victory in the Great Patriotic War. In fact, President Vucic was the first statesman to meet with Putin after his inauguration the day before. Many world statesmen, except Netanyahu, had turned down invitations, due to the recent Sergei Skripal issue.

The main matters discussed were the current state and prospects of Serbia-Russia cooperation, progress on joint investment projects, and of course, a deeper discussion of the Kosovo issue. This is essential for Serbia now, as during the week, the “Informer” portal in Belgrade wrote the USA and GB are preparing another “blackmail” for Serbia. It referred to the fact that in June these countries will ask Serbia to acknowledge Kosovo’s independence, not giving any concessions to Serbia. Although the source of such info remains unidentified, the portal stated that a new Rambouillet is being prepared, in which Serbia will be given an ultimatum. Otherwise, discussions with the EU will be interrupted and there will be economic sanctions. Washington is determined to solve the Kosovo issue, as they are concluding the strengthening role of Russia in the Western Balkans, especially in Serbia, is becoming seriously worrying, stated the portal. Meanwhile, Serbia is expecting compensations, not ultimatums. 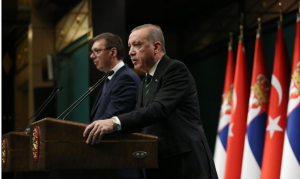 Vucic asked Putin not only to continue to support Serbia directly, but to express Russia’s political stance regarding Kosovo openly, before all international institutions. He assured Putin that Serbia will preserve its military neutrality, by not being part of NATO or any other alliance that imposes sanctions on Russia. “Without Russia, it is difficult to achieve a solution for Kosovo”, Vucic said.

Putin promised they will support Serbia and will follow closely the normalization of Belgrade-Pristina relations.

It remains to be seen how Turkey will respond, taking into consideration that it was among the first countries to acknowledge Kosovo as an independent state. Will the relations with Serbia and Russia remain friendly?

Of course, the EU and the US are aware of the fact that Serbia is still the “black sheep” of the problematic Western Balkan region. Ultimatums of every kind could further divide the region. Instead, playing the card of the EU common dream that all the six countries share, to finally accept them, seems an easier way to put an end to further dividing influential areas among big powers.

Is Belarus Moving Away From Russia?

US “Peace Deal”: The Guide For The Perplexed With Updates