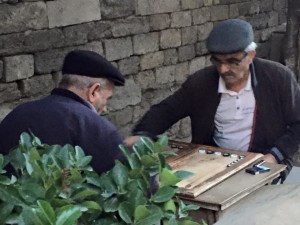 Azerbaijan is rarely mentioned in the news, unless the upcoming opening of a major international music or sports event is prompting the world’s media to mention it’s oil riches and suspect repressive practices against political dissidents.

Located along the somewhat blurry Eurasian border, surrounded by a hotchpotch of ethnically diverse and adverse neighbors in the Caucasus and around the shores of the Caspian Sea, this small country is embossed with a charming mix of oriental and occidental life style, showing distinct traits of both post-Soviet and Middle-Eastern culture.

While preparing for a new trip to Baku, I can’t help but remember with a smile on my face my first visit there.

Although the procedure has changed a bit now, you did and still do need an entry visa. Surprisingly, there was no need for a letter of invitation, one just had to present a return ticket and hotel reservation to apply for single-entry tourist permit.

Sure enough, I was suffering under extreme ‘Zeitnot’ and went to the consulate on an afternoon only to inquire whether an other person with power of attorney could arrange for the visa for me. The clerk, who never looked at me in my face, and was also otherwise extremely polite, inquired how quickly I would need the visa to be issued. Upon hearing my reply that I’d be leaving the country in the morning, he simply suggested that I shall bring my application along with the bookings within the next hour and he’d take care of the formalities ASAP.

I admit being a bit nervous and in serious doubt whether things would work out when arriving back at the consulate at the last minute of the public opening hours. However, the ever so friendly clerk reassured me that everything would be fine and invited me to return on the following morning to collect my passport from the security detail at the embassy. As funny as it may appear, this did indeed work out and amazingly, early next day I got my passport with a visa from a…sentry. Best service ever!

Several weeks later I boarded a flight to Moscow from where I was to connect to Baku. Due to a delay the layover turned out critically short, and the transfer desk staff advised me to better sprint towards the other terminal if I were to be allowed to board. While marching towards the gate at brisk pace a fragile lady caught up with me, asking whether she may join me as she did not know the new layout of Sheremetyevo Airport.

Sure enough, we chatted about the major facility improvements, she mentioned that for her it is a coming home after many years spent abroad and inquired if it is my first visit. Upon my confirmation, she praised the beauty of the city and concluded with the somewhat off-topic “Don’t worry, our men are very respectful towards women”…

We made it to the gate on time for boarding exactly as the entire passenger crowd, that appeared to consist of men only, rushed swiftly in jetway bridge direction with such momentum, as if they’d wipe out the airport staff. The female gate agents stood no chance at all while desperately trying to call for order or make the guys form a line. The passengers, styled in variations of mock-Adidas track suits and black leather jackets, were simply throwing their boarding passes towards the desk while scrambling through the door and literally racing towards the airplane. Who knows, perhaps they were indeed sportspeople and not just looking like members of a decorated wrestling or weight-lifting team… 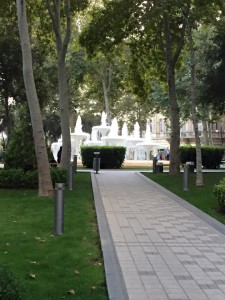 Once I have boarded as well and reached my seat, at least three gents rushed up and tore my purse and cabin trolley bag out of my hands and stowed them away so swiftly, that I couldn’t even protest. Every time I’d try to retrieve my purse, nearby passengers would jump and beat me to it…My acquaintance was subjected to the same extremely friendly treatment.

Upon landing in Baku past 1:30 AM, suddenly the uncontrollable crowd from Moscow lined up dutifully at the single immigration desk that was still open and the long waiting set in… And this time the men that were watching intently every breath I took aboard tuned in to tunnel vision and my female co-passenger and I ended up last in line.

While taking in the surroundings, in the waiting area I have noticed a simple tall table marked with a mysterious flag reading ‘VIP-Service’, manned by a guy in an elegant suit. After the first 30 minutes of slow or non-existing movement in the queue, the first guy lost it and dashed towards the ‘VIP-Service’ flag. He handed over his passport and USD 120,00 to the suited man who then walked over to an unoccupied immigration booth, clicked his fingers to attract the attention of the sole immigration officer servicing the queue, who then stood up and went over to stamp the passport and let the ‘VIP’ pass without any further ado. Nice, huh?

Thus, time and again, another gent would run out of patience and skip the line against some dollar bills. It sure did not shorten my waiting time, gave much food for thought though about ingenious forms of corruption and the perfidious nature of civil servants in some parts of the world.

Certainly, the taxi drivers at Baku airport were also very helpful and I hate to admit that I have lost control over my luggage discouragingly quickly. My extremely friendly driver didn’t even bother to roll my obnoxiously heavy suitcases but carried them around while I was withdrawing cash and trying to figure out whether there is any legal or formal airport taxi desk. Alas, there was none, so I had to surrender to fate.

Upon my arrival at the hotel around 4:00 AM, and after quickly checking me in, the young skinny boy at the reception desk dashed out with lightning speed and got hold of my suitcases that have almost brought him to fall face down by their unexpected weight. However, he righted himself up and lifted them again with the determination of a professional weight-lifting champion, ignoring proudly the possibility to simply roll them towards the elevator. Knackered as hell, I was so happy to have finally made it to bed and catch couple of hours of sleep before heading out for my first business meeting.

Whatever I happened to ask for at the reception was apparently ‘no problem’, though some of the services were truly amusing. Need a taxi? No problem! One of the ever present companions of the reception guy that were keeping him company all the time, would run out of the hotel to the closest intersection and wait until a vacant taxi would pass by to flag it down and lead the driver around the block to the hotel.

Need room service? Yes, no problem! Upon asking where can I see the menu, I was told – no menu, just tell me what would you like to have, ma’am! Hard to guess, right? So I kept asking what do they have to offer. The suggested beef with vegetables, and a salad, and sweets, and fruit sounded good enough, so I waited, and waited, and some 40 minutes later the phone rang and my friend from the reception asked “Ma’am, there is no beef at the shop, can we make chicken instead, please?”… In all honesty, the food was absolutely delicious, also at the various places where I have eaten out. Even now I am salivating in anticipation of the treats for my palate that await me when I shall return to Baku in couple of weeks from now. 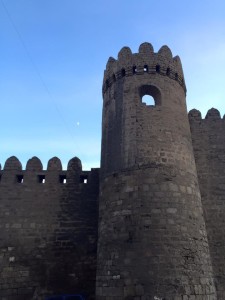 Surprisingly, coffee was a bit of an issue, not easy to find, and I almost died from tea and sweets overdose at the office of one of our customers. While the boss was tied up in an other meeting, the staff kept pouring me tea and seriously pushing me to binge drink it and eat a sweet after every sip or I’d offend their hospitality. As polite as I am, I kept indulging them, even though the tea was so strong that it gave me palpitations in the end. At least I have figured out the magical power of the brew known as ‘chifir’ (Russian “чифирь”), popular as drug substitute among poorer inmates in Russian prison colonies.

I loved walking the city and the beautiful mix of lovingly restored old buildings around the Maiden tower and Shirvanshah’s Palace with modern architectural wonders sprouting out in the ambitious quest to become ‘second Dubai’.

Above all, I have a very distinct memory of the amazing scent of the air, warm and softly brushing against my skin like feathery kisses, rich in flavor with the intoxicating cocktail of blooming flowers, fragrant spices from the cooking smells floating out through the open windows, the sea, and the specific dash of odor added by the oil rigs. I can’t wait to return to Baku and to give in to the magic of this fabulous city.

US Asks Greece To Deny Russian Flights To Syria