It has been a while that an “internationally renowned” former politician authored some empty and unfounded words of praise for Prime Minister Edi Rama. Last week, former Venezuelan Minister of Planning and current director of the Center for International Development (CID) at the Harvard Kennedy School for Government had the honor of writing a paean on the Rama government (as well as some friendly words for lapdog-mayor Erion Veliaj).

In doing so, Ricardo Hausmann has joined an illustrious team of fact-free sycophants, such as former French Minister of Foreign Affairs Bernard Kouchner, who called Prime Minister Rama “one of the most sophisticated political leaders of Europe,” and former New Labour spin doctor Alastair Campbell, who called him a “team player” and a “winner.” And then there is another Blair alumnus, former UK Minister of European Affairs and convicted fraudster Denis MacShane, who has cast Rama as the hope of social democracy in Europe.

Hausmann has been Minister of Planning under Venezuelan President Carlos Andrés Pérez, who was impeached on August 31, 1993 after embezzling 250 million bolivars and eventually sentenced in 1996 to 28 months imprisonment. So it seems he is still in good company.

Hausmann’s engagement with Rama hails back to the early years of his government. In June 2013, Rama invited Haussman to Tirana, to assist with the “challenges facing the government as it took office.” The result was a two-year project, funded by the Open Society Foundation of George Soros to “support economic growth in Albania,” called “Institutional Strengthening and Economic Diversification in Albania,” which eventually got extended to 2017.

Prime Minister Edi Rama also helped Hausmann’s own slumbering political ambitions in Venezuela when on July 16, 2017 Rama issued a totally random Spanish-language tweet regarding the July 17 referendum against Venezuelan President Nicolás Maduro, thus openly intervening in a foreign country’s internal politics. It remains a mystery to everyone what influence the Albanian Prime Minister could have hoped to have on Venezuelan politics. Nice try though! 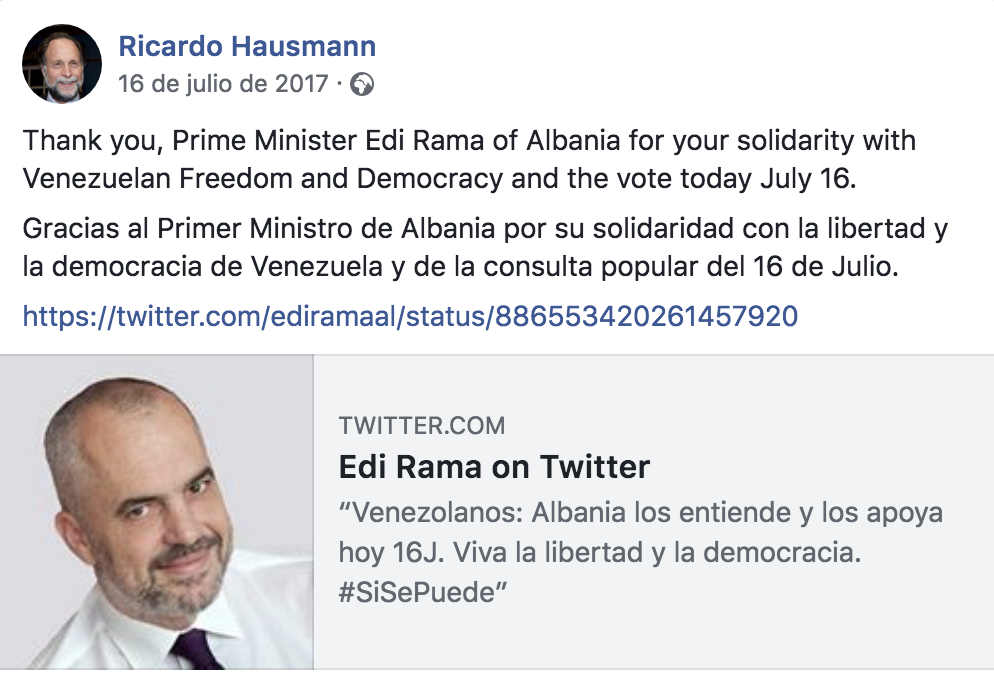 It is therefore unsurprising that Hausmann’s recent opinion piece, titled “The Albanian Miracle,” hails the total success of the Albanian economical reforms. However, he fails to disclose in the article that this so-called “miracle” is of his own making, paid for by Open Society Foundations. Just like Campbell before him, Hausmann profits personally from painting Rama as a success, and like Campbell, he hides this from the public.

In a follow-up article, we will debunk one by one the actual claims made by Hausmann about the Albanian economy.

Vincent W.J. van Gerven Oei is a philologist, curator, and publisher. His three-volume work "Lapidari" (punctum books, 2015) provides the first complete overview of socialist monumentality in Albania. Over the years his reporting has focused on the relations between the EU and Albania, the justice reform process, and developments in public space and the arts in Albania.