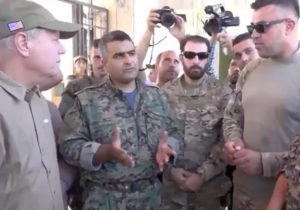 US Sentator Lindsey Graham in Manbij, Syria from a video screenshot

South Carolina US Senator Lindsey Graham visited Manbij in eastern Syria according to video and images posted online. There he met with US partner forces who helped defeat ISIS in the last years and who have been concerned about the future of US policy.

In one video the Senator is shown speaking with local forces. He said that he would tell US President Donald Trump that it was “important we stay here and help you, you are friends of the US and if we leave it will be terrible, I will tell the story of Manbij to my colleagues, it is a place of hope in a region that needs hope,” he said. His visit is symbolic and important especially because he is a powerful Senator whose is outspoken on a number of key issues in US foreign policy and at home. 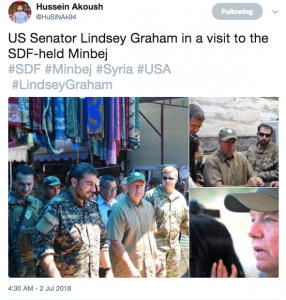 A local member of the forces in Manbij indicated that the US should continue to protect them. Images showed the Senator touring a shuk and meeting with people. One twitter user wrote “A high-level delegation from the International Coalition Forces and the American Congress visited #Manbij city today. Two of the senators were Lindsey Graham and Jeanne Shaheen.”

Graham had been on a trip to Turkey where he spoke out for an imprisoned US pastor and also met with the country’s leadership in Ankara. On June 29 he wrote “Very good, respectful, and candid meeting with President Erdogan. We have real differences, but far more in common.Turkey needs to be a strategic partner for the US in a win-win fashion.” Visiting Manbij he did not tweet on July 2.

It was interpreted among the SDF as a sign of support after US Secretary of State Mike Pompeo discussed a “roadmap” with Turkey. One wrote “US struggle showing #Syria’s #Kurds respect & support by sending a high-level delegation of OIR countries and even the Congress to #Manbij. Two of the senators are Lindsey Graham and Jeanne Shaheen.”

According to another user “[US Coalition] Maj. Gen. #Jarrard visit #Manbij met with Military and civilian administrations.” Shervan Derwish of the Manbij Military Council wrote “Today We have been visited by dear guests to take a look at the situation in the city ” Manbij “. It was a wonderful visit from the US Senate and the friends in the leadership of the international #coalition. #Manbij welcomed her guests.” The reference to Jarrard was not confirmed in other tweets but refers to Maj. Gen. James Jarrard, special operations commander, who also visited Manbij in June. 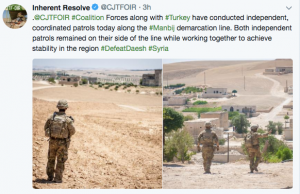 On the same day of the visit the Coalition tweeted about the joint patrols with Turkey. “.@CJTFOIR #Coalition Forces along with #Turkey have conducted independent, coordinated patrols today along the #Manbij demarcation line. Both independent patrols remained on their side of the line while working together to achieve stability in the region #DefeatDaesh #Syria.”

Previous Graham comments on US policy in eastern Syria

Graham has expressed interest in the US policy in eastern Syria for years. He was reportedly critical of US cooperation with the YPG last year. He was critical of the US relationship with the PYD as well, arguing that they and the YPG have ties to the PKK. He asked in the past whether this would make Turkey upset at the US for “arming the YPG.” In a 2015 video he asked the Pentagon about training fighters in Syria. “During a Senate Armed Services Committee hearing, U.S. Senator Lindsey Graham (R-South Carolina) questions General Dunford and Secretary Carter about the U.S. strategy in the Middle East.” He challenged Dunford, asking whether the “people we train” to fight ISIS will eventually turn on Assad and fight the regime. He indicated that the US was turning over Syria to “the Russians and the Iranians” and that the US was training fighters against ISIS who were not going to fight ISIS. “Assad is secure as the day is long, the strategy has completely fallen apart,” and he said the US was not helping the right people.

Senator Shaheen has not been outspoken about eastern Syria as much, but she has been part of the effort to restrict F-35 sales to Turkey. In April she, along with Senator Lankford and Tillis, introduced a bill regarding the F-35 sale.

Originally posted at the Middle East Center for Reporting and Analysis