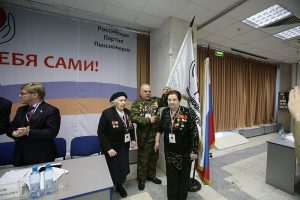 Foreseeing a gap in funding for retirees in the near future, Russia is finally raising the retirement age for men and women, bringing it more in line with Western norms. Currently men retire at 60 and women at 55. However, pensions are so meager, that many supplement with side jobs during retirement.

“Compared to many Western countries, Russians retire early: men at 60 and women at 55. Those who operate heavy machinery or work in difficult conditions qualify for early retirement. Nevertheless, pension payments are notoriously low in Russia, with the national average at just 14,000 rubles ($220),” reported The Moscow Times.

“Plans to raise the pension age, which was established in 1928, have circulated for years. But they have gathered pace in recent weeks, culminating on Saturday when Prime Minister Dmitry Medvedev signed off on a Cabinet proposal to the State Duma. The new system would see a staggered rise in the pension age starting next year, until reaching 65 for men by 2028 and 63 for women by 2034,” wrote The Moscow Times.

“Russia’s population is aging quickly,” said Oxana Sinyavskaya, deputy head of the Institute of Social Politics at the Higher School of Economics. “If the pension age isn’t increased now, then this will eat into the federal budget.”

Russian President Vladimir Putin promised the Russian public in 2005 that as long as he was in power, the retirement age would not change. Russian Prime Minister Dmitry Medvedev declared, “It’s important to realize that [Putin’s promise] was made 13 years ago,” he said. Russia has changed since then, he added: “No country exists in a vacuum.”

Since being re-elected to a third consecutive presidential term, Putin is now focusing on societal problems after finally stalling the rapid rise in military spending for modernization and overseas adventures. The Kremlin realizes the Russian public will suffer for long periods if for ‘the State’ but Moscow has a close eye on social unrest.