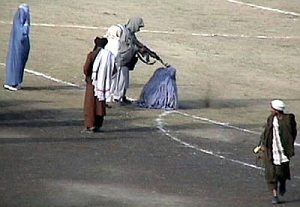 Image by Revolutionary Association of the Women of Afghanistan (RAWA)

The Afghan government declared this week that Taliban operations span the entire country, contradicting a recent briefing by Gen. John Nicholson, the outgoing commander of Resolute Support and U.S. Forces-Afghanistan.

The Taliban has launched “military offensives on multiple fronts across the country” and security forces “are tackling insurgents as part of their preplanned operations in at least 14 provinces,” TOLOnews reported based on statements made by the spokesman for the Afghan Ministry of Interior.

“This year the activities of the enemy has increased compared to previous years. The number of our operations also indicates that this year the number of casualties unfortunately has also increased,” ministry spokesman Najib Danish declared, reported the Long War Journal.

“Currently on average 50 members of the security forces are being killed and wounded each day,” added the ministry.

Pentagon spokeswoman Dana White has also described the Taliban as “desperate,” and said it “has lost ground” and “has not had the initiative.”

These reports come as American commanders in the area have confirmed Russia is arming and assisting the Taliban, the follow-on to the Mujahedeen which defeated Soviet forces in the country decades ago.