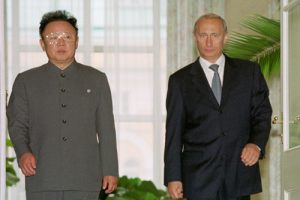 The Kremlin seems to getting behind the upcoming summit between U.S. President Donald Trump and North Korean Supreme Leader Kim Jong-un. Perhaps this is because Moscow sees the meeting as happening independent of their actions, or most likely, the art of the deal is in full swing.

Trump, the master negotiator, for sure understands that Russia, and China for that matter, have the ability to scuttle, or at least hinder a successful outcome to this bold, diplomatic initiative of the Trump administration – an attempt to deal with one of America’s most vexing national security problems and denuclearize the Korean Peninsula. It is probable that behind-the-scenes efforts have been ongoing with Russia as well for the good of the world, no matter what Mueller and CNN say.

Today, Putin declared that Trump’s willingness to hold the meeting with Kim was “brave and mature,” reported CNBC.

“I still hope that this meeting — a very brave and mature decision U.S. President Donald Trump has made, to have direct contacts with North Korean leader Kim Jong Un — will take place, and we all expect a positive outcome,” Putin said in an interview with China Media Group. Just to make sure it did not look like Putin was ‘all in’ for the United States, he added, “A pity that our Western partners, the United States and, unfortunately, South Korea have not stopped their military exercises and maneuvers that do nothing to aid de-escalation” of tensions in the region.

What does Putin want in return for help ensure success of the effort – of course, Putin wants an end to Western sanctions which have crippled the Russian economy. When asked about the issue, Putin responded that Russia wanted ‘good positive relations’ with the Americans and Europe. “We are not surprised by any restrictions or sanctions; this does not frighten us and will never force us to abandon our independent, sovereign path of development … But we understand that our partners are trying to limit our development by imposing these restrictions and sanctions.” Sanctions were futile, Putin said, and the policy “primarily hurts those who initiated it” but he believed that “common sense will still prevail.”

“We will be waiting for the outcome of the meeting between [US] President [Donald] Trump and North Korean leader Kim Jong-un and will contribute to the success of this meeting in every possible way,” added Putin in the interview, reported Russian state news agency TASS.

“The next stage is multilateral participation of all the interested states, chiefly regional ones, in the development of security guarantees [for North Korea,]” Putin said. He affirmed that Moscow’s proposals – “trilateral economic projects between Russia and the northern and southern parts of the Korean Peninsula” – will be on the table. “These are chiefly infrastructural projects. We are talking about the construction of a railroad, let’s say (and, by the way, China could join these projects as well), between Russia and North and South Korea. We are talking about the installation of a gas pipeline,” the Russian president said.

“The construction of various other energy facilities could be dwelled on as well,” he said. “There are numerous prospects for joint work both in the three-and four-party format; it is just necessary to move in this direction,” the Russian leaders affirmed, wrote TASS.

With all of the positive talk from all the players at this summit, it seems highly likely now that some type of success will not be forthcoming. Once again, everyone has underestimated The Donald and his dealmaking skills.