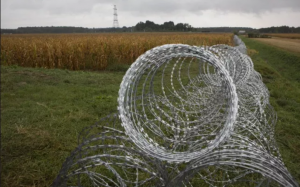 The increasing flux of illegal refugees, crossing the Western Balkans towards the European Union, is forcing the region to consider taking drastic measures to prohibit the clandestine migration.

This week, the Montenegrin government declared they are planning to build a wire fence on the border with Albania in the northwest.

The fact is that thousands of refugees from the Middle East and Northern Africa are trying their luck to reach the West through a new route – from Greece to Albania, then to Montenegro and Bosnia-Herzegovina, to reach Croatia that is now an EU country. This is due to the closure of the old pass through Turkey, Greece, Macedonia and Serbia in 2016, when Turkey decided to impede refugee flow in exchange for the Union’s help.

In the meantime, BiH is already facing a great number of asylum seekers that are settling in the country, hoping to find a way to cross the European borders.

Observing the above situation, the Montenegrin government is worried they may suffer the same consequences. That is why the Head of the Montenegrin National Border Department, Dragovic, stated that an increasing flux of illegal refugees could force Montenegro to build a wire fence on the border with Albania, to prevent them in the same way as Hungary did with Serbia and Croatia in 2015, when almost 1 million illegal immigrants were stopped at the border.

In an indirect way, the Montenegrin authorities are accusing Albania of letting illegal refugees cross the border. It is a fact that Albania is being used by the Middle Eastern migrants to cross its borders with neighbouring countries to reach the EU. Recently, more than 500 refugees have crossed the border with Montenegro or have requested asylum in Albania.

Asked by Report TV, the former Albanian Ambassador in Macedonia and Kosovo, Arben Cejku, stated that Montenegro has the right to express its concern to defend its borders, but that it is just a warning, not a decision. Albania and all Western Balkan countries should respect international conventions and cooperate with all neighbouring countries. Each country needs to have an internal dialogue and take measures to close possible corridors towards the EU. Montenegro’s warning is a common concern.

Botswana’s Opportunity To Recommit To Rule Of Law

Kosovo, U.S. To Sign Deal On American Investments In Kosovo