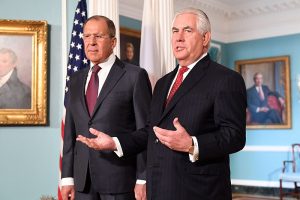 American Secretary of State Rex Tillerson said this week he does not want tensions with Russia to escalate further and would like to work towards better relations. The two nations have been locked in a tit-for-tat cycle of escalation since the Russian invasion of the Crimean peninsula in 2014.

“I think the secretary believes that no further escalatory action is necessary at this point, and we look forward to trying to forge ahead,” Heather Nauert told a press briefing on September 12, reported RFERL.

Nauert pointed to Undersecretary Thomas Shannon’s visit to Helsinki for meetings with Russian Deputy Foreign Minister Sergei Ryabkov. “The Russian Foreign Ministry said on September 11 that the talks focused on the “forced closure” of its consulate in San Francisco and the “illegitimate seizure” of trade annexes in Washington and New York,” wrote RFERL.

The Russian Foreign Ministry said recently this week that it ‘reserves the right’ to expel another 155 American diplomats from Russia.