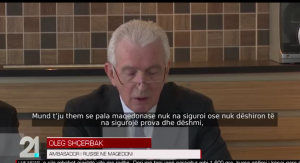 TV21 in Skopje reports that the Russian ambassador in Macedonia, Oleg Shverbag, has condemned the expulsion of a Russian diplomat from Macedonia, after the West’s common effort to blame Russia for poisoning its former agent in Great Britain.

The ambassador stated that the Macedonian government made such a decision under pressure, to converge its stance with NATO and the EU. According to him, the responsibility remains at the foot of the Skopje government. He sent a direct threat addressing Macedonian, saying, “You should know that London provoked us politically. Your action is quite unfriendly and unprecedented that will bring consequences to our mutual relations. The Russian Federation is a permanent member of the Security Council of UN and is responsible for its actions. We have an ancient tradition in diplomacy. We will ponder your actions and respond accordingly”.

He continued sending threatening declarations, stating that Macedonia’s membership in NATO will not bring any benefits to the country, in regard to national security, sovereignty or territorial integrity. On the contrary, it will only cause damage. Macedonia will become part of the military machinery. If an aggression to Russia happens, Macedonia will become the target in the battlefield between Russia and NATO.

No Final Deal With Serbia Without A Solution On Missing Persons, Says Kosovo’s Minister Of Justice