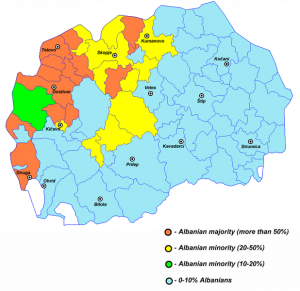 Only a few hours after the President of Macedonia, Ivanov, refused to enact the law on the official use of Albanian language in Macedonia, the Russian Ministry of Foreign Affairs presented strong opposition against Albanian government support for the measure, and support to the Albanian population in the Balkan country.

Albanian Prime Minister, Edi Rama, considered the ratification of this law as an historical achievement for Macedonian Albanians, a law that would strengthen and democratize the country. But, according to official Russia, which still wants to preserve its influence in the Western Balkans, such statements show confirmation of Albanian Socialist Government’s platform towards its ambition for a Great Albania.

“Socialist Prime Minister Rama continues to promote the notorious Tirana platform, which he helped to draft. The implementation of this document would erode the constitutional foundations of Macedonia”, said the Russian Foreign Ministry.

Referring to the continuous declarations of the Albanian government in favour of Albanian minorities in other Balkan countries, Russia also notes the help that the Albanian Socialist Party provided to the Kosovo Liberation Army during the Kosovo war and during the riots in Macedonia.

“Such an attitude would risk the territory of other countries in the Western Balkans. The ratification of the law on the official use of Albanian language in Macedonia would cause further political clashes in the country”, declared the Russian declaration.

“We attach great importance to the language issue and believe such decisions should be made only based on a wide- scale agreement, on a common consensus between the power and the society.”

The majority in power in Macedonia has made it clear they will ignore the President’s decree not to enact the law. The government’s coalition with Albanian parties aims to finally bring progress to the country’s policy towards EU integration.

Official Tirana has not denied its contribution regarding the unification of the Albanian factor, showing a common attitude in respect to the rights of Albanians in Macedonia, including the official use of Albanian language.

Albanian Foreign Minister, Ditmir Bushati, had just responded to Russian reaction as follows:
“We express our regret for the misinterpretation on the part of Russian Foreign Ministry, regarding the greeting declaration of Albanian PM Rama, on the enactment of the law on the official use of Albanian language. We welcome such a law, as it fulfils one of the key engagements of Ohrid Agreement.

“But, like Russia, Albania is an outsider, as far as the internal political discussions in Macedonia are concerned. We will remain as such, but at the same time, we are interested to invest in the ethnic harmony, stability and Euro-Atlantic perspective of the region”.