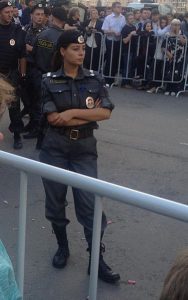 The Russian national guard, or Rosgvardiya, was formed in 2016 in the run-up to the 2018 Russian presidential election. Its stated purpose is to keep public order and to fight terrorism; however, many in the Russian opposition believe the force was put together to primarily prevent political demonstrations the Kremlin doesn’t want to happen.

With the nationwide, presidential poll schedule for March 18th of this year, today, the leader of the new security force made it clear force will be used against attempts to disrupt the election.

“We are always waiting and preparing for a contingency in any situation. If it happens so, we will be ready for it. We will act firmly, but under law,” said the Head of the National Guard’s Main Directorate for Public Order Protection Alexey Zinin, reported Russian state news agency TASS.

“We are to take part in protection of more than 93,000 election polls and surrounding areas together with the Interior Ministry and private security companies,” he said, adding that most attention will be paid to the anti-terrorism security of these facilities.

Russian opposition candidate and anti-corruption activist, Alexei Navalny, has called for a boycott of the election due to the Russian Election Commission’s refusal to allow him to compete against Vladimir Putin. Navalny has also called for massive opposition demonstrations/rallies on January 28th in 85 cities across Russia.

In June of 2016, Russian opposition website Meduza reported, “A State Duma committee has approved legislative amendments that would give Russia’s new National Guard the right to use deadly weapons against large crowds, in order to free hostages, prevent terrorist attacks, or suppress attacks on government installations and cargo shipments by armed groups.”

“We believe that in these cases the risk in harming random individuals will be justified,” the Committee’s statement said, RBC reported.

Russian Story Of The Year