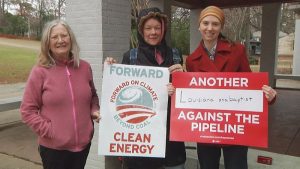 The U.S. House of Representatives released a report yesterday which shows the Russian troll farms used social media to incite Left-wing activists against the U.S. fossil fuel industry, prompting demonstrations against pipeline projects and fracking efforts. Russia is a hydrocarbon powerhouse, a nation which Senator John McCain famously labeled ‘a gas station posing as a country’. Slowing the growth and export of American shale oil and gas would have been a major goal of Russia and OPEC at the time.

“The Kremlin has a motive to disrupt U.S. energy markets and influence domestic energy policy, since American energy represents a direct threat to Russian energy interests,” the report states.

With the media hysteria pushing the Trump/Russia narrative to full steam ahead mode, the truth is slowly trickling out that Russia wanted to disrupt our Democratic processes, sow division, and promote efforts which helped Russian interests, like preventing the U.S. fracking energy revolution, not get Trump elected. The stakes were high as oil and gas prices, which accounts for over 50% of Russian federal revenue, were plummeting on international markets, threatening to drive a stake through the Russian economy’s heart.

“According to the report, groups such as the Internet Research Agency, a Russian company with links to the Russian government, used propaganda to target Energy Transfer Partners’ Dakota Access Pipeline, TransCanada Corp.’s Keystone XL pipeline, and other projects. Russian-sponsored agents also funneled money to U.S. environmental groups in an attempt to portray energy companies in a negative way and disrupt domestic energy markets, the report said,” wrote Fortune.

The Russian Federation, which is now the largest exporter of wheat in the world, also seems to have targeted the American GMO industry, another Left-wing cause celeb.

A logical step in the investigation of this ‘trolling’ and interference in American domestic policy would be to investigate our university system, where many of the instigators of these demonstrations originated. Is Russian, or Chinese for that matter, money behind the collapse of our university system? Are liberal profs receiving payments from foreign entities? Enquiring minds want to know.