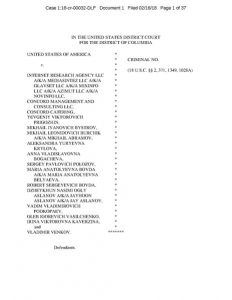 U.S. Special Counsel Robert Mueller unveiled the details of a widespread and coordinated campaign by Russians to influence the U.S. presidential election in favor of Donald Trump, delivering on his initial mandate by the Justice Department.

In an indictment disclosed in Washington on Friday, Mueller describes a sweeping, years-long, multimillion-dollar conspiracy by hundreds of Russians aimed at criticizing Hillary Clinton and supporting Senator Bernie Sanders and Trump.

He charged 13 Russian nationals and three Russian entities and accused them of defrauding the U.S. government by interfering with the political process…

SecDef: Russia Is Main Threat To US Security