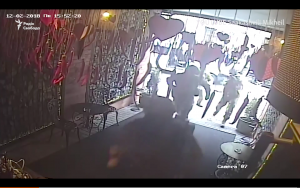 Ukrainian political activist Mikheil Saakashvili was recently apprehended and deported from Ukraine after President Petro Poroshenkno revoked his citizenship. Saakashvili resigned his post as governor of Odessa, Ukraine to protest alleged corruption directed from the top of Poroshenko’s government.

The dramatic CCTV video of his arrest for deportation is shown in the video below. Saakashvili has vowed to re-enter Ukraine and to conduct political activities within the country from Poland, where he lives with his wife who is an EU citizen.