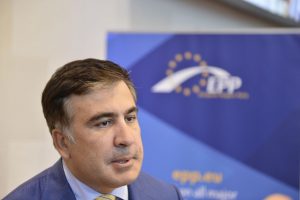 Mikhail Saakashvili, the stateless politician who is wanted for extradition to Georgia, broke through a line of border guards today to make it back to his new home state of Ukraine. The Ukrainian government tried hard to prevent him from returning and revoked his citizenship. However, Saakashvili, kicked out of the country for calling out the president of Ukraine for corruption, was not to be denied.

Saakashvili and Poroshenko were once buddies, and Poroshenko appointed Saakashvili president of Ukraine. However, upon arriving at his post, 18 months later, Saaksahvili resigned due to a alleged culture of graft that he could not overcome and that he said was coming from the top. That seemed to be too much for the government of Poroshenko to swallow.

Today Saakashvili broke through a gauntlet of border guards at the Polish border along with throngs of supporters and made his way to the city of Lviv, Ukraine’s largest city, where he remains.

“Prosecutor-General Yuri Lutsenko said late Sunday that charges would be pursued against organizers of Saakashvili’s unauthorized entry. The Ukrainian Interior Ministry said 17 police and border guards were injured in the confrontation,” reported AP.

“The crowd approached the line of guards and eventually began shoving, then broke through. Supporters who had gathered on the Ukrainian side rushed forward to greet Saakashvili and the crowd proceeded toward the Ukrainian town of Shehyni on foot.”

Former Ukrainian Prime Minister Yulia Tymoshenko and Mustafa Nayyem, a lawmaker who was a key figure in the 2013-14 protests that drove Russia-friendly Ukrainian President Viktor Yanukovych out of the country, accompanied Saakashvili on his journey into the center of the country.

Ukrainian President Petro Poroshenko said Saakashvili should have contested the decree stripping him of citizenship in court if he disagreed with it. “But instead, he committed a crime — because the state border must not be violated,” reported Associated Press.

Later Saakashvili said the Ukrainian government stripping him of citizenship was a crime.

Why Was A Hamas Delegation In Mauritania?