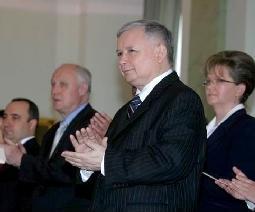 The head of the Law and Justice Party (PiS) in Poland, Jaroslaw Kaczynski, the de facto leader of the country, declared this week that Poland will not yield to demands from Brussels over its actions on judicial reform.

“The program of deep changes in our country will not slow down, on the contrary – there cannot be any talk about reaching an agreement with powers that for years treated Poland as their own private loot,” Kaczynski told the daily Gazeta Polska Codziennie, reported Reuters.

Kaczynski corrected recent comments by Polish Foreign Minister Jacek Czaputowicz, who intimated the European Court of Justice could solve the issue, “There is, of course, no way Poland would hand in a decision on the court reforms to the Court of Justice. This is our internal competence guaranteed by EU law,” said Kaczynski.

Brussels has file ‘infringement procedures’ against Poland, legal proceeds that could lead to action under the bloc’s Article 7, which could see Poland lose its voting rights in the European Union. However, this outcome is unlikely as Hungary would most likely veto any such action against its Eastern European neighbor.