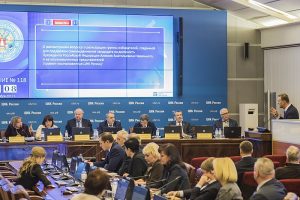 After being prevented from running against Russian President Vladimir Putin due to a previous embezzlement conviction, which many say was politically motivated to prevent him from running, anti-corruption activist and would-be presidential candidate, Alexei Navalny, called for a boycott of the nationwide poll on March 18th, and demonstrations against the government across the Russian Federation today on January 28th. Indeed there were protests across the country, although it seems not the numbers Navalny wanted. He was detained in Moscow during one of these ‘illegal rallies’.

“The largest protests of the day were expected in Moscow. Around 1:30 p.m., protestors of all ages began filing into Pushkinskaya Square in the city’s center, at walking distance from the Kremlin. From the outset, the energy was palpable. Earlier, police had broken into the offices of Navalny’s Anti-Corruption Foundation using an electric saw to cut through the doors. After protesters were detained en masse at a series of Navalny-led protests against rampant corruption last year, many came prepared for the worst,” reported The Moscow Times.

“I am ready to be shot if it comes to it,” said Sergei Ivanchenko, who is 27 years old and who is employed by a workers’ rights organization. “I understand the possible consequences…Governments only work for the people if they are held accountable.”

Earlier in the day, Navalny’s headquarters was raided with electric saws and shut down. He was arrested within minutes of appearing on Tverskaya Street, near the demonstrations.

“Come to Tverskaya,” he wrote on Twitter. “You’re not coming out for me, but for yourselves and your future.”

Protesters have walked across central St Petersburg and are now congregating on the Marsovoe Polye. Police are keeping their distance. A few are moving towards Palace Square, which the Bolsheviks stormed in 1917 pic.twitter.com/V13FfJX6wC

The Kremlin downplayed the rallies. The strategy seemed to be to allow them to take place but to not let them get too large or out of control. The strategy seemed to have worked. The chairman of the presidential human rights council, Mikhail Fedotov, said, “According to preliminary data, about 5,000 people took part in rallies of Alexei Navalny’s supporters, both authorized and unauthorized…Rallies are still going on and I call on both side to show restraint and observe laws,” reported TASS.

Many protesters were arrested by Russian security services at the rallies as well. However, there was no violence.