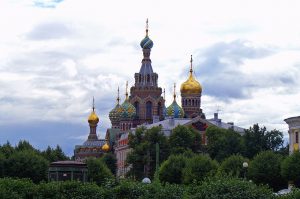 A bomb ripped through a supermarket in St. Petersburg today in a possible terror attack.

“Nobody was killed in the explosion, but at least four people were hospitalized and there were unconfirmed reports of a further 10 people being injured. The cause of the blast was not immediately known, but Russian news agencies reported that investigators had opened a criminal case on the grounds of attempted murder,” reported Reuters.

“An unidentified explosive device has detonated in the Gigant-Hall entertainment center on the first floor near self-lockers of the Perekrestok supermarket [without causing a fire],” reported Russian state news agency TASS.

Russia’s Investigative Committee pursues all lines of inquiry probing the explosion at St. Petersburg’s shopping mall, the Investigative Committee told TASS. “The investigators are exploring all lines of inquiry,” he said.
The explosion was equivalent to 200g of TNT and hit at 6:30pm, during the busiest time of the year as people were shopping for gifts.

One aftereffect of the Russian campaign in Syria against the Islamic State and the Syrian opposition is a constant threat of Islamic terror in the major Russian cities. 30% of the Russian Federation is Muslim and the Caucasus in south-central Russia represent a hotbed of extremism.

Despite tensions between Washington and Moscow, the defeat of ISIS remains common ground that the two nations have stated is an area of current and future cooperation.

#BREAKING NEWS: Massive emergency response as preliminary reports says that at least 3 people were injured after a storage chamber of a supermarket in St. Petersburg, Russia. pic.twitter.com/5VezR3LYzP