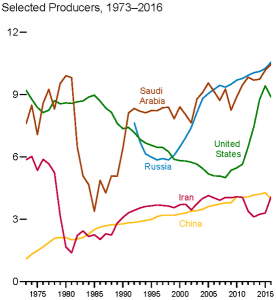 Russia says it will slowly, carefully, ramp up production of crude oil, possibly even keeping some curbs in place to increase revenue without collapsing the price of crude on international markets once again. The current agreement with OPEC expires at the end of 2018.

“Everyone in the market is interested in achieving balance,” Alexander Novak, Russian Energy Minister, said in response to a question on whether Saudi Arabia could abruptly exit the cuts as soon as it lists Aramco sometime in 2018. The share sale promises to be the world’s biggest, reported Reuters.

“Detailed parameters will be discussed by the time we approach balance. There could be different timeframes, depending on forecasts of supply and increasing demand in global markets…We have a common understanding on this issue but I don’t want to discuss hypothetical scenarios now,” Novak said.

“There is a consensus among the (oil) ministers that we should avoid oversupply on the market when exiting the deal.”

Novak said there was an option to extend the deal beyond 2018, while he sees markets balancing in the third or fourth quarters of next year, reported Reuters.

“Our task, above all, is (to achieve a) sustainable demand and supply balance. We aim to reach this result, this could be achieved, if things are going well … during 2018.”

The big elephant in the oil production deal room is American energy producers, who are looking to ramp up production as the price of crude oil rises. In fact, this is one of the main concerns of Russia energy officials, that extending the production deal too long will give financial leverage to U.S. shale oil fields to restart. Novak mentioned this factor as well in his comments. President Donald Trump has made U.S. domestic energy production a lynchpin of his “Make America Great Again” strategy.

“But they also have rising demand, which is partially offseting the rise in production,” declared Novak.