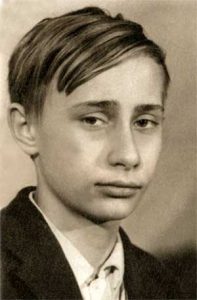 Vladimir Putin’s torso, which he sometimes bares during sporting pursuits, is a familiar part of his public image. How much Putin reveals of the man behind the buff exterior is another question.

After 18 years as Russia’s leader — and with another six-year term sure to follow a March election — Putin doesn’t show the appetites or vulnerabilities that can personalize Western politics, even when staged or spun. If he has moments of merriment or melancholy, they happen in private…