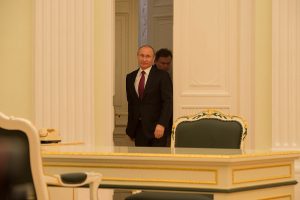 A recent poll by an independent Russian pollster showed most Russians hold President Vladimir Putin responsible for the current problems in the Russian Federation. These concerns mostly center on economic issues, standard of living, social services, and corruption.

The Levada Center has been accused of taking money from foreign entities and being a ‘foreign agent’ after publishing polls detrimental to the Kremlin’s agenda.

“Seventy-six percent of respondents said they held Putin responsible to at least some extent for the country’s problems, while 19 percent abdicated him of any responsibility. Some 15 percent of those polled said they believe Putin “does not know how people live” and has “forgotten about ordinary people.” Seven percent said he does not do enough to fight corruption. But 19 percent described Putin as a “strong-willed” and “real man,” and 18 percent said they appreciate that he protects the country from the West,” reported The Moscow Times.

Putin has not announced officially that he will run for the Russian presidency again in 2018. However, the Kremlin has been preparing the facts on the ground for a Putin victory.