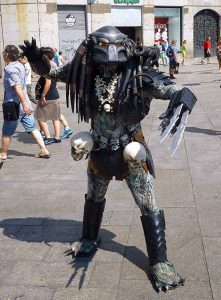 Dmitry Semizorov, the CEO of TsNIITochMash, a Russian defense contractor, recently outlined some projected features of the new Ratnik combat gear being developed for Russian soldiers. He outlined the details in an interview to Russian state news agency TASS.

“The newly-developed fabrics we use cannot be picked up by infrared detectors. They block the heat coming from the human body. Military personnel wearing such clothing remain invisible in the field to enemy helicopters’ night vision instruments,” Semizorov explained.

“Any modern combat helicopter, equipped with night vision instruments, is one of the infantry’s worst enemies from dusk till dawn. Evading its electronic eyes is next to impossible, which has been confirmed more than once in various local conflicts. Thermal imagers and infrared instruments are used by snipers and are installed on armored vehicles and drones,” reported TASS.

“We are considering the possibility of equipping such footwear with mine detectors and of placing a mine field suppression system inside such footwear or some other part of the gear…For now the sole and heel are too thick.”

“We have at our disposal certain information about the impact our product was exposed too in real combat. The helmets and armored vests turned out to be fully bullet-proof.”

Russia has used the Syrian conflict as a way to test military technology and new ideas for combat equipment. In essence, the Kremlin has structured the entire campaign to act as a massive infomercial for Russian arms manufacturers.

Several countries have ordered new Russian hardware after seeing its performance in the Syrian theater.