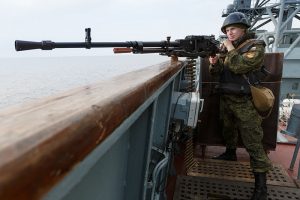 “I hope that in the long run, Tartus will become a full-fledged military base,” the deputy chairman of the Federation Council’s Committee for Defense and Security Franz Klintsevich told the RBC business portal.

“As the guarantor of Syria’s stability, Russia is defending its interests,” he said, reported The Moscow Times.

Russia signed another fifty year lease on the site earlier this year as reported by Tsarizm.com.

Russia has used the Syrian civil war as a means to reassert Russian influence in the Middle East, a capability long sought by its predecessor, the Soviet Union. This force structure will allow Russia to counter the NATO alliance in the Mediterranean and preserve a presence on the alliance’s southern flank.

The United States military forces in the region disagree that the fight against the Islamic State is over in the Levant as President Putin declared recently on a surprise visit to visit Russian forces in the region. Much of the drawdown of the Kremlin’s military assets in Syria is meant to pay to the Russian domestic audience as the 2018 president election approaches. Putin recently confirmed he will be running for a fourth term.