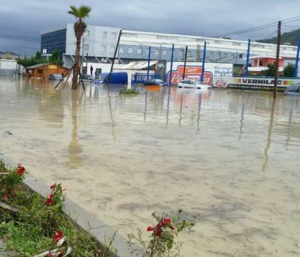 In the last several days the situation in Albania became alarming due to heavy rain. There have been floods, especially in the central and southern regions. Roads have become impassable, rivers have washed over their banks, villages have flooded, and people have been evacuated. Mother Teresa Airport was closed and many flights cancelled. One of the main, most important highways that connects the capital Tirana with Durres, the seaside city only 35 km away, was completely inaccessible because of water. Many cars were stuck on the roads and a lot of important businesses on both sides of the highway have suffered serious damage. 18 buildings were flooded during a recent night.

In the north of Albania, some segments were blocked because of heavy snow. There have also been landslides in the south. 71,000 people are without energy in the most affected areas.

A lot of units were mobilized to help. Police, Civil Emergency Unit, Army, Firefighter Units, the Albanian Road Authority, and the Energy Distribution Operator are engaged in facing the difficult situation.

Late last week, due to warnings even from the neighbouring country, Greece, the Albanian population was informed about the approaching severe weather and possible floods. The situation remains alarming. All this was forecasted last year when Albania suffered the same consequences under heavy rain and floods and businesses suffered 10 million euros in damages. It was required from the authorities to take immediate measures to improve the situation, to intervene in the poor infrastructure, especially on Tirana-Durres highway, by opening new canals and widening the existing ones. However, nothing was been done.

Albania is blessed with mostly good climate conditions, but these rare natural phenomena show the weather has us at its mercy. Urgent measures are needed to be taken by the government as it is only the start of winter, which is predicted to be tough this year.