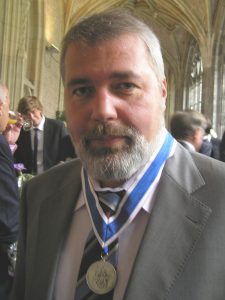 The editor of Moscow’s main independent newspaper, Novaya Gazeta, is retiring. Dmitry Muratov has been in the position for 22 years and the paper has become the main focus of attacks against independent journalism in Russia. At least five journalists from the paper have been murdered on his watch. The most famous being Anna Politkovskaya in 2006 who was gunned down outside of her apartment.

“Dmitry is tired,” said one source at the paper, reported The Moscow Times. “22 years, that’s too much. Even two years ago, I told the editorial board that this is my last term,” said Muratov.

Recently a journalist at Ecko Moskvy, an independent radio station, was stabbed in the throat and almost killed while working in the studio. Another was attacked with liquid human feces, had her car firebombed, and fled the country.

Violence against journalists is commonplace in Russia. Novaya Gazeta was founded by Mikhail Gorbachev.

“Muratov said the newspaper will form a new oversight organ called the Editorial Council that will be responsible for all “strategic matters.” An unidentified source at the newspaper told RBK that Muratov would participate in that council,” reported RFERL.

Muratov also recently made the decision to arm his journalists with non-lethal weapons. “We will also supply journalists with other means of security, which I don’t want to talk about,” he said.

“Do you want people to fight, stab [journalists] and know that these [journalists] are defenseless and unarmed? Neither the authorities nor law enforcement will stand up for them,” Muratov said.

“We are forced to defend ourselves by all available means. We’ve been left with no other choice,” he said.