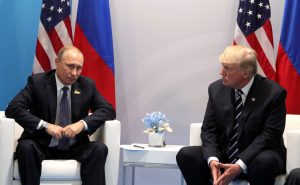 The White House seemed to reverse itself in refusing to confirm an upcoming meeting between Russian President Vladimir Putin and U.S. President Donald Trump during the Asia-Pacific Economic Cooperation (APEC) in Vietnam. The administration did hint that the two leaders may ‘run into each other’ and ‘meet on the sidelines’ of the summit.

Russia’s Foreign Minister Sergei Lavrov had said earlier in the week that Putin was ‘ready to meet.’ Even Trump himself had discussed a possible meeting, reported The Moscow Times.

“In terms of a scheduled formal meeting, there’s not one on the calendar and we don’t anticipate that there will be one,” White House Spokeswoman Sarah Huckabee Sanders said onboard Air Force One.

“Are they going to bump into each other and say hello? Certainly possible and likely.”

This rejection seems to be The White House sending a message of its displeasure over some diplomatic development, possibly regarding Russia’s help with North Korea, which is one of President Trump’s main priorities during the trip.