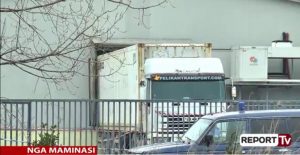 Yesterday, 613 kg of cocaine were seized at Durres Port, 35 km from the capital. This is the highest quantity ever found within the Albanian territory. The drug had been transported from Colombia, hidden inside a trailer that imported bananas, belonging to “Arbi Garden” company. Through Italy and Malta, it reached its final destination in Durres, where it was to be processed and then distributed in smaller quantities to big European markets, mainly Germany. Such a great quantity means it had a strong guarantee elsewhere, and this makes a bigger concern for the Albanian authorities that should be discovered. Analysts believe there is a very powerful operator behind all this.

According to experts, the cocaine was highly clean, so it was intended to be mixed here, before getting distributed. By simple calculations, experts stated that after such a process, its quantity would be 1.8 tons, at 100 thousand Euro per kg. If it then reached European destinations, the profit for narco-traffickers would have been 180 million Euro.

The Albanian drug Mafia surely has connections with Colombia drug traffickers, where drugs can be bought at a cheaper price, so they increase the profit margin when sold.

The trailer containing this big amount of cocaine was supposed to import bananas from Colombia. The police intervened after midnight, when the first bananas were unloaded at the warehouse, in Maminas village, very near Tirana International Airport. The manager of the company “Arbi Garden” and 8 other people have been arrested so far.

This is not the first time that drugs have been sent to Albania to be processed and then distributed in the region or Western Europe.

The EU office and the US Embassy in Tirana greeted the Albanian Police and Customs operation for the cocaine seizure, encouraging Albania to further continue its war against organized crime.

Putin Shows Worries About US Rearmament With Nuclear Comments

The Internationals Are Sleepwalking Into An Autocracy In Albania