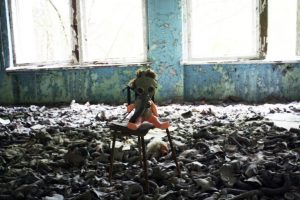 Wild animals from the Chernobyl region are migrating to Northern Europe and bringing their radiation with them. Wild boar have recently been killed in Sweden with ten times the safe radiation level.

Frykman explained that, of 30 wild boar samples taken from the area surrounding the city of Gävle this year, only six were below the safe radiation limit of 1,500 becquerel per kilogram (Bq/kg). Alarmingly, flesh from one wild boar that had been killed by hunters registered a massive 16,000 Bq/kg, while others were 13,000 and 11,000 Bq/kg.

“When you see 16,000 [Bq/kg], people get worried,” he said, reported New York Post. He is worried in coming years the problem could be much worse with 20 or 30 times safe radiation levels found in wildlife.

Frykman stated that wild boar are particularly susceptible to radiation, “The cesium stays in the ground,” he said. “It’s not a problem for moose and deer any more who eat higher up, from bushes.”

Reports of irradiated dogs and other wildlife have surfaced recently as the delayed effects of one of the worst nuclear disasters make their presence known decades later in the region.

Similar issues have been reported in Fukushima as well.