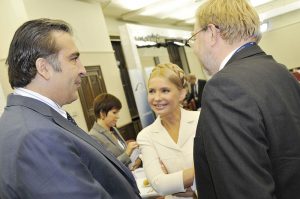 Ukrainian opposition leader, and former president of Georgia, Mikhail Saakashvili has applied for political asylum in Ukraine. The stateless politician is under threat of extradition to Georgia, where he is wanted on corruption charges. Saakashvili crossed the border from Poland into Ukraine in September after President Petro Poroshenko revoked his citizenship. The move was seen as political by Poroshenko to prevent Saakashvili from competing with him for power. Saakashvili is now also the leader of the Movement of New Forces.

Saakashvili’s lawyer Markiyan Galabala told Russian state news agency TASS, “Saakashvili asks to be granted the status of a citizen who needs additional protection. Political asylum is an ordinary name for this status.”

“The State Migration Service has not responded to our request yet. The response is to be received during the day, according to the law.”

Ukraine’s Prosecutor General’s Office and Justice Ministry said that the decision on whether to extradite Saakashvili to his native Georgia has not been made. Ukraine’s Justice Minister Pavel Petrenko said all the relevant information for the strictly legal process will be reviewed and a verdict announced at the appropriate time, reported TASS.

According to the Justice Ministry Saakashvili cannot be removed from the country while the asylum process is underway.