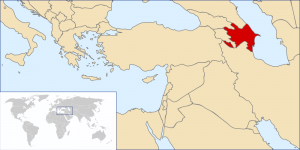 Opposition protesters held a large rally in Baku, Azerbaijan on Friday to protest corruption and alleged money laundering in government. The protest was held by the National Council of Democratic Forces — an umbrella organization bringing together some of Azerbaijan’s opposition forces, reported RFEFL.

“From 2012 to 2014, even as the Azerbaijani government arrested activists and journalists wholesale, members of the country’s ruling elite were using a secret slush fund to pay off European politicians, buy luxury goods, launder money, and otherwise benefit themselves,” writes OCCRP.org.

The ‘Azerbaijan Laundromat’, as the scheme was called in a report, laundered billions while the government arrested journalists and opposition figures alike, while buying silence from authorities and the media.

“Return the money stolen from the people,” chanted the demonstrators.

Much of the dirty money was laundered through Western financial institutions, especially in the U.K.