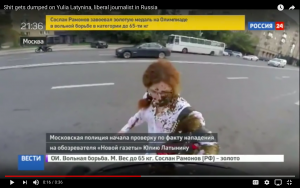 In July, someone released some sort of gas into our family home.

For about a week, Russian police held watch near our house. When they left I felt at ease, thinking the attackers had considered it a signal. But apparently they didn’t.

In August they set alight my car, which was parked near the house. My father doused the flames so that the house wouldn’t catch fire. Had the car exploded it would have cost him his life. So we left. I cannot risk my parents’ lives.

I don’t think the goal was to kill me or my parents, but once the ball starts rolling such attacks can have unforeseeable consequences. I left because I was horrified by people’s lack of responsibility.

My departure from Russia comes as a surprise — even to me. I always laughed at those who, seven or eight years ago, said Russia was a dangerous country and that Putin was worse than Stalin. Because this was not the case…