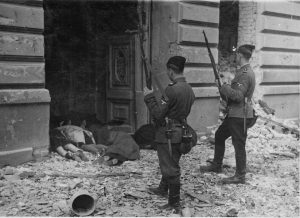 Today Germany Rejected claims from Poland for renewed talks on war reparations from WWII. Poland says it wants to reopen talks on the issue and may ask for up to $1 trillion in damages, asserting the decision to refrain from addition damages in 1953 was dictated by the Soviet Union. The decision to ask for reparations seems to be a way for Eastern Europe to fight back against dictates from Brussels that it be forced to take thousands of Islamic migrants which it believes will destroy its security and culture if allowed.

“Poland made a binding decision in August 1953… to relinquish demands for further war reparations,” government spokesman Steffen Seibert said, adding that in the view of Berlin, “this issue was therefore settled both legally and politically,” reported AFP. Seibert said that Germany had fully recognised its responsibility in World War II, while emphasising that it had also paid “considerable reparations for overall war damages” to Poland.

“The position of the Polish government on war reparations will be officially expressed when a political decision is taken,” she said in a radio interview.

Brussels has also started infringement procedures against Poland for judicial reforms that the Law and Justice Party (PiS) has passed through parliament. The EU sees them as hurting democracy and the rule of law. PiS sees them as essential to remove Leftist judges from the communist era.

Medvedev Dreams For The Russian Economy

Are The Wheels Coming Off In Russia?