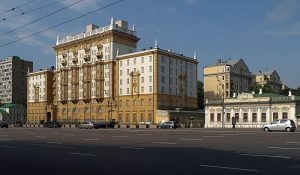 The tit-for-tat diplomatic strikes have been going on for some time now between the United States and Russia after President Obama forced the closure of Russian diplomatic outposts in the U.S. citing Russian interference in the U.S. 2016 election. Today, Russian President Vladimir Putin hinted at further actions from Russia to come after the United States closed the San Francisco Russian consulate and limited activity at the Russian Trade mission in Washington, D.C.

American inspections of the closed facilities angered Moscow, who called the actions a violation of the Vienna accords and sovereign private property rights. Attending the BRICs summit in China, President Putin said Russia “reserve[s] the right” the force the removal of 155 more American diplomats from Russia.

Although the inspection issue did not garner much media attention in the West, Russian media was ablaze with the ‘humiliation’ of Russian diplomats in the United States, almost guaranteeing further action to come from the Kremlin.